A routine story about traffic congestion quickly escalated into one about a murder inquiry for two weekly newspaper reporters last week.

Hereford Times reporter Rebecca Cain was first alerted when a man was hit by a van on the city’s Roman Road on Tuesday night. After making a call to the police, a story went online on the newspaper’s website,

The road in question was closed –  but when it remained closed more than 18 hours later, reporters’ suspicions were aroused.

Police then announced that the body of a woman had been found and she was known to the crash victim, and Times staff knew they were on to a much bigger story than they first thought.

It led to entailed a hectic day of chasing leads for Rebecca and her colleague Ben Goddard, updating a live report that had been read more than 50,000 times by Wednesday evening.

Fortunately, Ben, pictured below, was perfectly equipped for what lay ahead of him as, aware of the road closure, he had decided to come into work on his bike. 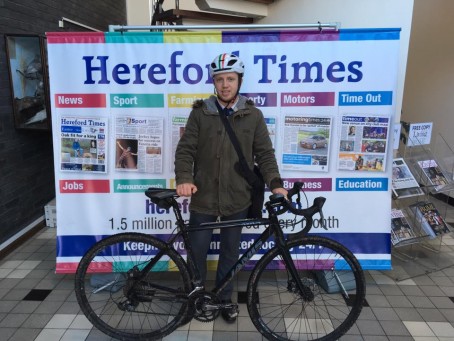 He explained: “Traffic congestion is a big problem in Hereford, and when a busy road closed I thought there would be problems so I chose to take my bike to work instead of the car.

“As drivers sat in traffic I nipped by before stopping and taking pictures of the tailbacks.

“Having my bike meant I could ride past all the queuing traffic to take pictures of the crash scene and use off-road routes to get the best pictures and live information about the police investigation.

“Right on the newspaper’s deadline I had a phone call from the paper’s assistant editor Ian Morris to tell me a house was being searched nearby.

“I was able to use an off-road shortcut to reach the area using the maps app on my phone. I found the house and took a picture of forensic teams searching the house.

“It turned out a murder investigation was being carried out. Without my bike I wouldn’t have been able to get across the city so quickly, or help cover the story nearly as well.”

On Wednesday evening a police press officer informed Rebecca that an arrest had been made and it was now a murder investigation.