Tory councillors have publicly criticised three rival newspapers for not holding pre-election hustings on their patch.

The opposition Conservative group on Croydon Council has published an open letter urging the Croydon Advertiser, Croydon Citizen or Croydon Guardian to host a public debate before next month’s local elections – accusing the titles of doing a “huge disservice to our democracy” by not doing so.

However, the editor of one of the titles says he is “surprised” by the letter because he has never been approached about holding any such event.

The letter, published on the Croydon Conservatives Twitter page, is addressed from the group’s leader Councillor Tim Pollard to Cllr Tony Newman, leader of the authority’s ruling Labour group.

A letter in which I ask @CllrTony to join me in pushing for a proper hustings event for #Croydon to allow residents to interrogate all the main parties. pic.twitter.com/boG1dlrozv

In it, Cllr Pollard urged Cllr Newman to join him in writing to Advertiser editor Andy Worden, Citizen editor James Naylor and Guardian editor Jim Palmer to request that they “provide that service to their readers and our residents” in the run up to the 3 May poll.

Cllr Pollard wrote: “Croydon has a great history of open and passionate debate. You and I have both been to and participated in many election hustings in the past, usually hosted and facilitated by our local papers: the Croydon Advertiser, the Croydon Guardian and in recent years the Croydon Citizen.

“This year it seems that none of these publications are hosting one. Croydon Conservatives and I believe this is a huge disservice to our democracy, and to residents who look forward to these exchanges in the run up to our elections.”

He added: “I hope you will join me in writing to the editors of the three publications requesting that in the final fortnight they work to provide that service to their readers and our residents. The people of Croydon deserve the very best from us – let’s discuss our visions for Croydon, and let them make an informed decision on 3 May.”

The Advertiser and Guardian are both weeklies, published by Trinity Mirror and Newsquest respectively, while the Citizen is an independent monthly title.

Citizen editor-in-chief James Naylor told HTFP he was a “little surprised” by the Tory group’s post.

He said: “We’ve not been, to our knowledge, formally approached about running hustings by email. I think it’s great the Croydon Conservatives want to maximise their engagement with the community. But we actually feel that the service to democracy was actually – by far – best served by the publication of our head-to-head ‘Croydon Manifesto 2018′ feature in print.

“This was the lead story of our April edition and the subject of some eye catching cover art by local artist Dimitra Rizou because of its importance. We have experimented with running hustings in the past but those events can sometimes be dominated by activists and in the best case, will attract a hundred or so people.

“Our double page feature on the other hand, reaches up to 30,000 people and gives them time to carefully consider the parties responses on the key issues. It’s also available online for anyone who wasn’t able to get themselves a copy of the print edition.

“For us, it’s a question of priorities; what creates the most democratic value. If people can run hustings alongside all the other things that the modern – usually stretched – local newspaper can do, that’s great. But we’d prefer to continue focusing on putting our resources where it can make the most difference to the community.”

HTFP has also asked the Advertiser and Guardian for a comment. 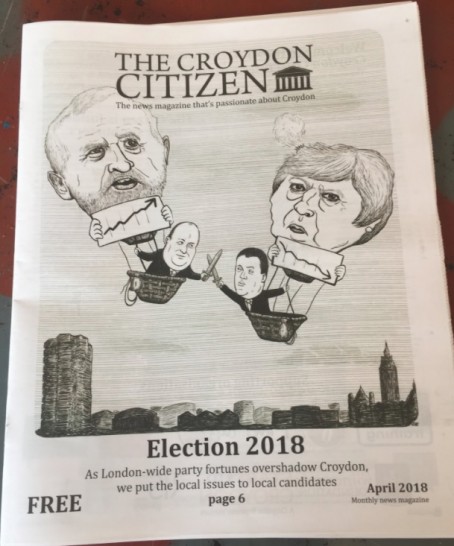