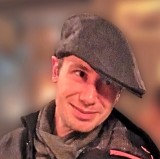 An island daily has launched a Christmas anti-loneliness campaign after the family of a suicide victim spoke out about their loss to the newspaper.

The Jersey Evening Post’s ‘Jersey Together’ bid is calling for readers to help support people who may be struggling, for any reason, in the run-up to Christmas.

The campaign’s launch comes after the JEP last week spoke to the family of 30-year-old Christopher Thompson, pictured, who took his own life earlier this year after encountering financial difficulties.

Mr Thompson’s family have backed the campaign, as well as others on the island affected by similar tragedies.

JEP editor Andy Sibcy said: “The whole team was touched by Christopher Thompson’s tragic story and the impact his death has had on his family.

“But, beyond that, we quickly realised that his story had also affected many of our readers.

“It is a pleasure to be able to use the JEP’s privileged position in the community and its reach to launch a campaign to achieve something so positive.

“I hope, in the coming days, we can share examples of how people are embracing the message of Jersey Together to seek help if they need it, or to do something for somebody else.”