A journalism student who founded a hyperlocal news website to practise his skills after noticing a lack of coverage from nearby newspapers is set to go full-time with the project a year after it was launched.

John Guinn set up the Cranfield & Marston Vale Chronicle after being inspired by a university talk, but is now hoping to step up his commitment to the site in order to cover more local events and council meetings.

John has also touted the idea of launching a sister print publication for his patch, which covers a number of villages between Bedford and Milton Keynes, and is set to offer advertising space on the site for the first time.

Before launching the Chronicle, which serves an area of around 20,000 people, he spent five years as a community radio travel show presenter and also wrote a monthly column for travel trade magazine Travel Bulletin for four years. 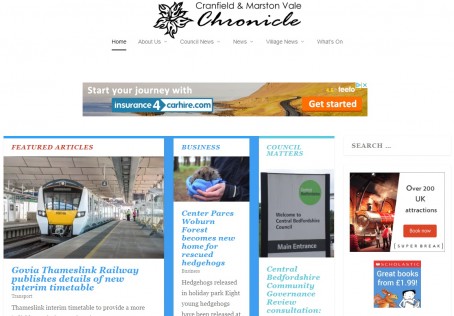 He began a part-time Masters degree in online journalism at Birmingham City University in 2016, with the aim to become a travel journalist, but was inspired to set up the Chronicle after attending a talk about hyperlocal websites during his studies.

Of how the Chronicle has progressed since his launch, John told HTFP: “This area isn’t really covered by local newspapers unless there is an incident such as a ram raid at a local store. During the first year the Chronicle covered many different topics, with the most popular involving health, property development and crime.

“Not having a local news background, I was surprised to discover how important the reopening of a local store or post office is to people.

“As I am online I have found it a challenge to be accepted by some organisations as a ‘proper’ news provider. The press office at one council refers to the Chronicle as a blog and village Facebook groups also provide competition to be first with the news.”

John covers both Bedford Borough Council and Central Bedfordshire Council in his work for the Chronicle, and is now set to go full-time later this month.

Discussing the highlights of the site’s first years, he said: “I was asked by a resident to find out why the local council had spent money set aside for a new GP surgery on other projects. This was a long-standing grievance for residents as the existing surgery is seen as not being able to cope with the constant house building in the area. I discovered that there wasn’t any money set aside in the first place. I’m not sure that this was the answer I was meant to give.

“The Chronicle has given local campaign groups a platform for their causes. For example, the Lidlington Action Group features regularly. If Central Bedfordshire Council’s Local Plan is approved, the village of Lidlington (around 550 homes) will suffer 20 years of building works while it becomes surrounded by 5,000 new homes.

“So far, the Chronicle has been run on a part-time basis. From mid-July I will be full-time. This will allow me to cover more local events and council meetings. As readership grows I will be offering advertising space on the site.

“A future possibility is a printed monthly magazine. This will provide another income stream and allow me to write more in-depth articles on local topics.”