A regional daily sports editor has written a new book charting the “stunning transformation” of a football club on its patch.

Shields Gazette journalist Ross Gregory has brought out ‘From Eden to Paradise: The Incredible Fall and Rise of South Shields Football Club’, which chronicles the club’s “rollercoaster ride” from being within weeks of becoming extinct to winning the FA Vase at Wembley.

The book tells of how South Shields went from playing in front of 12 paying fans at a rented ground at Peterlee’s Eden Lane ground to lifting silverware as 15,000 supporters watched on. 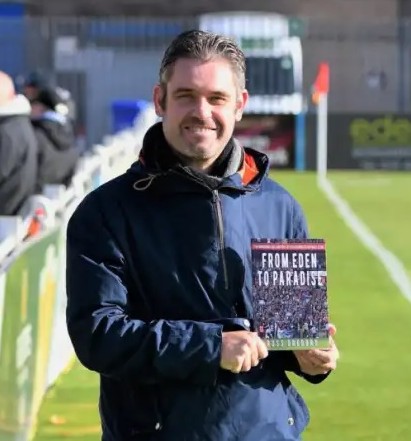 Ross, pictured, told the Gazette: “My background is in non-league football so I thought I’d better get the book written while South Shields are still a non-league club.

“The way things are going, that might not be the case for much longer.”

From Eden to Paradise: The Incredible Fall and Rise of South Shields Football Club is available priced £14.99.

A limited number of signed copies are available by contacting the author on 07739 300613 or emailing ross.gregory@hotmail.com.

It can also be bought from The Back Page, or ordered from Amazon in paperback or Kindle version.