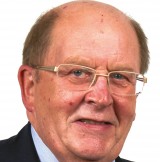 A new annual lecture honouring a former regional daily editor has been announced by the Society of Editors.

The SoE is launching the Satchwell Lecture, named for its former executive director Bob Satchwell, who also edited the Cambridge News from 1994 to 1998.

Bob, left, stepped down from his SoE role in March 2017 after suffering a debilitating aneurysm and stroke, and the event will help to raise funds for his rehabilitation care.

The Society’s current executive director Ian Murray said: “No one involved over the last few years in the battle to protect a free press and diverse media here in the UK can be in any doubt of Bob’s huge contribution to that cause.

“From Leveson to the creation of IPSO, from threats to Freedom of Information, to the countless other attempts to stifle free speech, Bob was always there in the fight.

“This is a chance not only to ensure his name remains at the forefront of that fight but enables on this first occasion the industry to say some small thanks to a man who worked tirelessly on its behalf.”

The event has a small registration fee of £10 and places are limited.

Tickets can be booked via Eventbrite here.