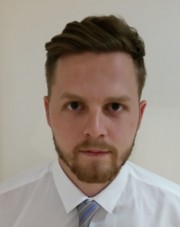 A former local TV news chief is to head up a six-strong team managing a new website launched in the heart of a rival patch.

Initially the project was led by Huddersfield Examiner editor Wayne Ankers and TM head of digital for Trinity Mirror Regionals, with a team of journalists seconded from other TM titles.

Now they have handed over the day-to-day management to a new permanent team headed by Matt Millington, a former head of news and current affairs with local TV station Made in Leeds.

Matt, pictured, has also previously worked as a reporter for news agency North News, covering national news in the North-East.

He will continue to report to Wayne as the editor overseeing the Leeds Live project.

The other members of the Leeds Live team are as follows:

* Joe Mewis – Leeds United editor. Whites fan Joe has returned to Yorkshire after a five-year stint on the Mirror football desk at Canary Wharf and has also written four books about football history.

* Nathan Hyde – Live news reporter. One of two dedicated news reporters on the Leeds Live team, Nathan has moved to the city after working as a reporter in Reading and Guildford.

* Kristian Johnson – Live news reporter. Another recruit from local TV station Made in Leeds where he worked for two years, Kristian studied journalism at the University of Sheffield where he achieved a first class honours degree.

* Beren Cross – Digital sports writer. Another Sheffield journalism graduate, Beren joins the Leeds Live team from The Herald in Plymouth, where he followed the fortunes of League One’s Plymouth Argyle.