Three sister weeklies have all called on a county council leader to quit as the authority faces “the worst financial crisis in its history.”

The Northamptonshire Telegraph, Northampton Chronicle & Echo and Daventry Express have all urged Councillor Heather Smith to resign from her position at Northamptonshire County Council in front page pleas issued on Thursday.

The Conservative-run council has brought in a so-called section 114 notice to prevent new expenditure, with chief finance officer Mark McLaughlin projecting a £21.1m overspend for this financial year and predicting a “grave” situation to come.

Cllr Smith has rejected calls to resign over the issue, but the three Johnston Press-owned weeklies say there are other reasons she should go. 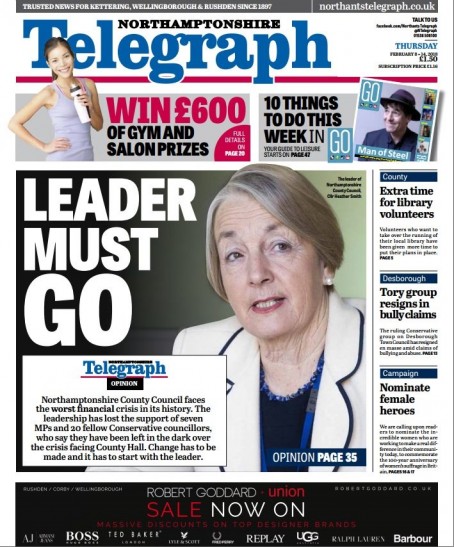 An editorial in the current edition of each paper states: “Last year, the findings of an independent peer review on the financial management of the council was highly critical of how the cabinet and some officers were handling the situation. Those findings were not made public by the council.

“Later, a leaked email sent by Councillor Smith to her Conservative colleagues revealed that the party had timed the controversial announcements over cuts to library services, trading standards and highways to avoid damaging the party’s chances in the 2019 Northampton Borough Council elections.

“A shocking revelation and one that angered many campaigners that they were the victims of political games. Equally concerning is that the county’s MPs and the backbenchers say that they were left in the dark as to the seriousness of the financial situation in Parliament. On Tuesday, in the Commons, Wellingborough MP Peter Bone described the cabinet as a ‘clique’.

“The county council is in financial meltdown and the leadership has lost the faith, and respect, of the county’s MPs and half of the members of the Conservative group on the council. Change has to be made, responsibility has to be taken and it has to start at the top.”

The council declined to comment when approached by HTFP, and would only confirm that Cllr Smith had not resigned.