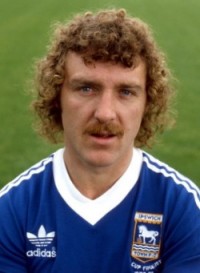 Two sister dailies have launched a fundraising appeal in order to build a statue of the “greatest ever” footballer to ply his trade on their patch.

HTFP reported in October how the East Anglian Daily Times and Ipswich Star were campaigning for a permanent memorial made for former Ipswich Town and England player Kevin Beattie, pictured, who died the previous month at the age of 64.

Now a campaign to raise £110,000 for a statue of Mr Beattie has been officially launched by the newspapers in conjunction with BBC Radio Suffolk and Town supporters’ website TWTD.

The campaign, called ‘The Beat Goes On’, was launched yesterday (Tuesday) to coincide with what would have been his 65th birthday.

Brad Jones, editor of the EADT and the Star, said: “The Beat was the complete footballer, and he holds a very special place in the hearts of fans – not just because of his time as a player, but after his career he continued to have a terrific rapport with supporters, and always had time for them.

“We think this statue is a fitting and justified tribute to a man voted our club’s best ever player.”

It is hoped the statue will be installed close to Town’s Portman Road ground once the money is raised.