A second former regional journalist has shared his own theory on the identity of Jack The Ripper – claiming “beyond reasonable doubt” he was hanged in Dundee the year after carrying out his notorious crimes.

HTFP reported on Monday how ex-Welwyn Hatfield Times reporter Paul Christian had named artist Walter Sickert as the Victorian serial killer after five years of research which began while he was working on the newspaper.

But former Dundee Courier journalist Michael Mulford has now claimed to have “used the laws of evidence beyond reasonable doubt” to prove that William Henry Bury was responsible for the murders, which took place in London in 1888.

Bury, who has previously been touted as a Ripper suspect, became the last man to be hanged in Dundee the following year after being convicted of strangling and mutilating his wife Ellen Elliot. 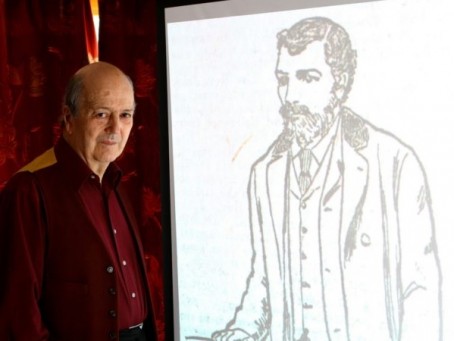 Michael Mulford with a sketch of Bury

Now Michael, 72, will present his evidence at a charity event called ‘The People Versus Jack the Ripper’, set be held in the old court room at Kirriemuir’s Gateway to the Glens Museum tonight (26 September).

A 30-strong invite-only ‘jury’ of mainly retired police officers will be asked to give their verdict after hearing the evidence and a discussion will follow.

Michael first heard about the possible connection between Bury and the Ripper case from police contacts while working as the crime reporter with The Courier in 1967, but told his old newspaper it was only since retiring as a Royal Air Force public relations officer in 2012 that he has had the time to investigate properly.

His research involved sifting through thousands of documents in the National Records of Scotland archive, while Michael also uncovered evidence showing that Bury created a fake contract of employment to get him from Whitechapel to Dundee – simply because it was “getting too hot” for him to stay in London after the murders there.

Bury tried to fool detectives that his wife had strangled herself but blurted out he “got frightened he would be apprehended as Jack the Ripper”.

Michael believes this was a “classic mistake of guilty knowledge”, and after further investigating the FBI profile research from the 1980s, which highlighted the Ripper’s hatred of prostitutes, Michael also provides evidence that Bury’s experience of being a horse butcher may have helped him mutilate the victims.

Michael told the Courier: “The FBI profile is so close in detail they might as well have named Bury as Jack the Ripper.”