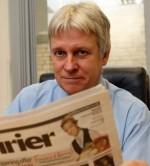 A regional publisher has carried out a restructure of its weekly operations in Yorkshire after a second editor opted to take early retirement.

HTFP reported on Friday that Ed Asquith was stepping down as editor of the Scarborough News after 15 years in charge and 30 years with the company.

Now publisher Johnston Press has confirmed that John Kenealy, pictured, has also taken early retirement after six years in the chair at the Halifax Courier.

Both Ed and John’s former portfolios will now be overseen by Jean MacQuarrie, group weeklies editor for Johnston Press Yorkshire, meaning she will be responsible for titles as far afield as Halifax and Whitby, a distance of 92 miles.

James Mitchinson, editorial director for Johnston Press in Yorkshire, said on Friday: “We regret to announce that John Kenealy is to take early retirement.

“Previously editor of the Halifax Courier, the Wakefield Express, the Dewsbury Reporter Series, the Pontefract and Castleford Express and other weekly titles in West Yorkshire, John is a newspaper man through and through, and has led the digital transformation of the West Yorkshire weeklies news teams to great effect.

“He leaves with our grateful thanks and very best wishes for the future. Jean MacQuarrie, group weeklies editor for Johnston Press Yorkshire will assume responsibility for the titles previously edited by John with effect from today.”

A similar announcement had been issued in relation to Ed the previous day.

When asked by HTFP whether Ed and John’s departures were part of a co-ordinated restructure, a JP spokesman responded: “With both John and Ed electing to take early retirement, the time was right to consolidate these roles and adapt our business to reflect modern working best practices.”

John spent most of his career at the Courier, but had previously worked for the Wakefield Express and the Derby Telegraph.

In Halifax, he held a series of roles including sports editor, news editor and deputy editor before taking up the editorship.