Rival Cambridge newspapers have paid tribute to Stephen Hawking following the physicist and cosmologist’s death at the age of 76.

Both the daily Cambridge News and Cambridge Independent splashed today on the death of Professor Hawking, who was director of research at the Centre for Theoretical Cosmology within the University of Cambridge and was associated with the city for much of his life.

He died peacefully at his home there yesterday.

The News splashed on a photo of Professor Hawking, who suffered from a rare early-onset slow-progressing form of motor neurone disease and communicated through a speech-generating device. 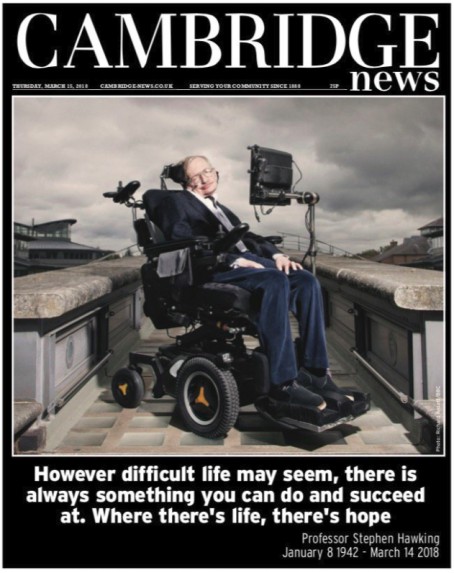 The front page also featured the following quote by him: “However difficult life may seem, there is always something you can do and success at. Where there’s life, there’s hope.”

Editor David Bartlett told HTFP: “When a person who has inspired so many people like Prof Stephen Hawking dies you are faced with the difficult question of how you do a front page that is a fitting tribute?

“The huge challenges that he overcame in his life to become a towering intellectual force make him perhaps the best example of succeeded over adversity to rise to the top of his field.

“We felt that a simple front page that showed Prof Hawking in his wheelchair with one of his inspiring quotes was the best way to achieve this. We deliberately did not tell readers how many pages of coverage were inside to keep the design simple. We chose to plus our eight-page supplement on page three instead.

“I hope we have done Prof Hawking justice with today’s paper, it appears to have been well received by our readers.”

News executive editor (print) Julie Palmer added: “It was a sad day for Cambridge but I hope we paid a fitting tribute to one of the most inspirational men who ever lived.”

The Independent’s front page featured a picture of Professor Hawking with a background of stars behind him and the quote: “Remember to look up at the stars and not down at your feet.”

The paper is printed on a Tuesday night, but editor Paul Brackley said there had been “no hesitation” in decided to publish a special edition. 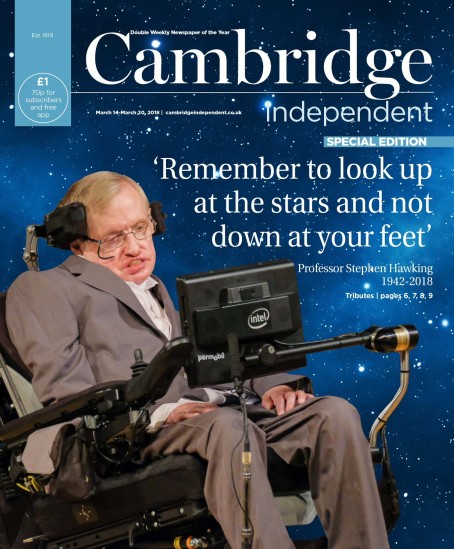 Paul, associate editor Andy Veale, reporters Gemma Gardner and Ben Comber and picture editor Keith Heppell put together coverage of Professor Hawking’s life and work, tributes from Cambridge and further afield along with a reminder of some of his best quotes.

The paper was printed at Iliffe’s Cambridge press, and the Independent’s own distributors took the first copies out to the shops on Wednesday, with further copies delivered by wholesalers overnight.

Said Paul: “Professor Stephen Hawking was an inspiration to millions. It was a natural step for us, with our printing press on-site, to respond with a special edition and the team did an excellent job in creating it.”