Publisher axes weekly series saying they have no ‘sustainable future’

A series of weekly newspapers have closed because they do not have a “sustainable future in print”, a regional publisher has said.

Newsquest has confirmed the closure of the Campaign series, which covers areas of South-East Wales including Blackwood, Bargoed, Ystrad Mynach, Caerphilly, Cross Keys and Newbridge.

The free newspaper, which was distributed to thosuands of homes across the Gwent Valleys, was published for the last time yesterday.

Newsquest says it will continue to cover the Campaign’s patch in its Newport-based daily title South Wales Argus. 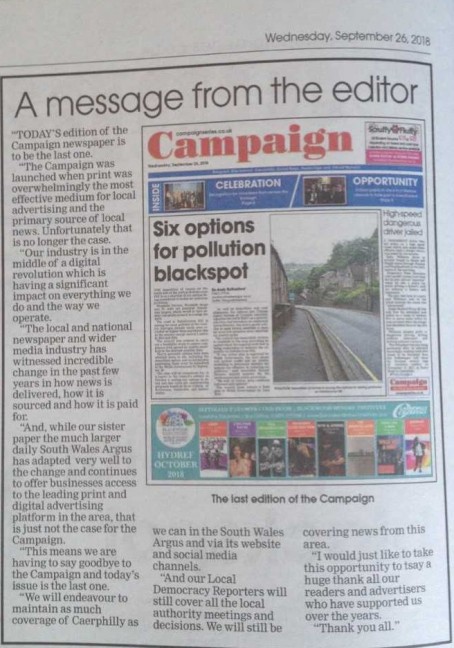 Hussain Bayoomi, managing director of Newsquest Wales, said: “Following a detailed review, we have decided to close the free distribution Campaign newspaper which we do not believe has a sustainable future in print.

“We will continue to cover Caerphilly news through the South Wales Argus whose online platform goes from strength to strength, as well as serving local Caerphilly businesses through our portfolio of cutting edge digital marketing solutions.”

The areas covered by the Campaign continue to be served by two weeklies – the independent Caerphilly Observer and Reach plc’s Rhymney Valley Express.

Readers were informed of the Campaign’s closure in an editorial inside yesterday’s paper.

It states: “The Campaign was launched when print was overwhelmingly the most effective medium for local advertising and the primary source of local news. Unfortunately that is no longer the case.

“Our industry is in the middle of a digital revolution which is having a significant impact on everything we do and the way we operate.

“The local and national newspaper and wider newspaper industry has witnessed incredibly change in the past few years in how news is delivered, how it is sourced and how it paid for.

“And, while our sister paper the much larger South Wales Argus has adapted very well to change and continues to offer businesses access to the leading print and digital advertising platform in the area, that is just not the case for the Campaign.”