Regional journalists urge Coronation Street writers to ‘do your research’

Regional journalists have urged soap writers to “do their research” after negative portrayals of reporters in recent episodes.

Industry professionals have hit out at Coronation Street after a scene which saw a mob of local journalists harass the friends of a murder victim on the street.

The scene, which aired on Monday’s night’s episode of the ITV programme, prompted reaction from journalists across the land, who took to social media to voice their criticism.

In the show, the local press is represented by the fictional Weatherfield Gazette, and real-life reporters have also criticised the made-up paper’s poor design and content. 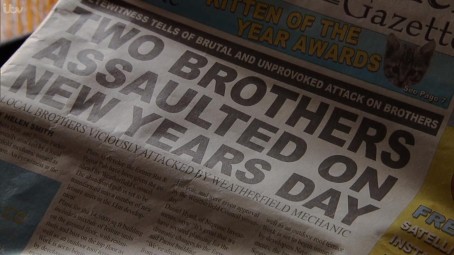 On Twitter, George Torr, reporter at Sheffield daily The Star, wrote: “Coronation Street portraying the press in the most ridiculous light. Reporters and photographers running down the street getting in the faces of friends of a murder victim. This doesn’t happen.

“Complete bollocks like this gives local media a bad name. No wonder journalism is seen in such a poor light by the average person.”

“It’s insulting and upsetting to paint us as monsters in all your storylines that feature members of the media. Journalists are principled, have morals and a code of practice, and never hound grieving families.”

The design and content of the Gazette also came in for criticism, with Northants Telegraph reporter Sam Wildman posting the below on the social media site.

Cuts to journalism have hit Corrie's Weatherfield Gazette harder than most.
– No apostrophe in New Year's Day
– Case is active as Luke has been arrested, so likely to be in contempt
– Editor has pulled a story about a development into the box on the front pic.twitter.com/cATcT1Oi7r

Northern Echo reporter Charlotte Bowe added: “A lot of things are far-fetched in soap land, but it would be nice if Coronation Street made a tiny effort to portray how journalists and media law actually works. Not to mention exclamation marks slapped all over The Weatherfield Gazette.”