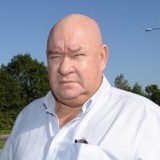 A journalist and local councillor described as a “larger than life character” has died aged 63.

Tributes have been paid to Alan Bennett, left, who worked on the Herts Advertiser and a number of newspapers in Buckinghamshire during his career.

More recently, prior to his retirement, he worked for the Maidstone-based Downs Mail and was a member of Hollingbourne Parish Council.

Alan “had not enjoyed good health for many years” and passed away on 20 October at Maidstone Hospital after suffering a kidney failure and a heart attack.

His wife Anne told Kent Online: “Alan was a big man with a big character – he used to call himself Marmite because you either loved him or hated him.

“He was principled and stuck to his beliefs, which people didn’t always like, but he was a very loving, kind man who would do anything for anybody.

“He was a people person who wanted to do things for the benefit of his community, and had strong feelings about inequalities in society.

“If he thought something was wrong, he’d tell you – you always knew where you were with Alan.”

Away from journalism, Alan was a keen member of Kent County Cricket Club and a supporter of Maidstone United Football Club.

He was also involved with the Royal British Legion.

John Cobbett, of Hollingbourne Parish Council, said: “He’d been disabled for many years with only one leg, and wasn’t unknown to Maidstone Hospital, but he wasn’t put off by that.

“He was a larger than life character and will be sadly missed by a lot of people.”

As well as Anne, Alan is survived by brother Roger.