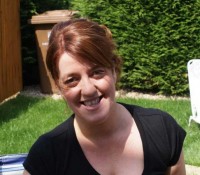 A regional editor who left her role for a council PR job five years ago has died at the age of just 47 after battling string of health issues.

Anne Caine, left, spent 10 years at the Greenock Telegraph and edited the title between 2011 and 2013 before leaving to join East Renfrewshire Council’s media team.

According to a report in her old paper, she had been battling a strong of health issues after being taken ill around 18 months ago.

She died at home in Inverkip last month after taking what her sister Louise called “a sudden and unexpected turn for the worse.”

Said Louise: “We are devastated. It has hit the family really hard.

“We knew she wasn’t in the best of health but she seemed to be adapting. I spoke to her the day before and she seemed fine. She seemed to take a turn for the worse.”

Anne studied journalism at Napier College in Edinburgh and worked at the Lothian Courier and the Falkirk Herald before landing a post with Scotland on Sunday.

She joined the Greenock Telegraph in 2003 and was chief sub-editor of the title before taking on the editor role.

Anne’s successor as editor, Brian Hossack, said: “Anne was someone who took pride in working with the Telegraph’s team, making them feel valued and developing and nurturing their talent.

“But while she was an outstanding editor and journalist, anyone who met Anne will first and foremost remember her as a fair, compassionate and understanding person.

“She played a huge role in keeping the paper at the heart of Inverclyde and had a real impact on the lives of everyone who met her.

“Anne will be sorely missed by the profession, but will be missed most of all by the people who were lucky enough to have been able to call her a friend as well as a colleague.”

Stephen McCabe, leader of Inverclyde Coucnil which covers Greenock, added: “In any dealings with Anne at her time with the Tele, she was clearly a thoroughly decent person and was always cheery and positive in her manner.

“Anne had far too little time on this world.”

Anne’s last job was with Argyll and Bute Council for whom she worked up until last December when she became too ill to work.

She leaves her husband, Iain, and their ten-year-old son, Joe, as well as sisters Louise and Jennifer and father James.