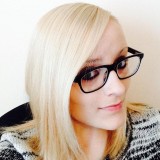 A regional digital editor has been named as one of the United Kingdom’s most talented and influential young journalists.

Sian Elvin, social media and homepages editor at Kent Live, appears on the MHP 30 to Watch list, which is now in its seventh year.

The list helps celebrate the influence and importance of young journalists who are making a difference to the UK media industry.

The 30 winners were selected from a record-breaking 400 entries from over 90 different titles, and was presented with her honour at an awards ceremony on Wednesday.

Sian, pictured, posted on Twitter: “I was bowled over to be named one of MHP’s 30 to Watch at an excellent awards evening alongside so many talented journalists.”

She told HTFP: “I think awards like MHP 30 to Watch, which recognise young journalists and the work they do, are so important.

“People leaving school and university are often discouraged from going into the industry with people criticising the ‘death of newspapers’, but work which was on display at the event showed there are so many creative and engaging new ways to tell stories, such as podcasts, Facebook Live and Snapchat.

“Young journalists will be continuing to give voices to those who can’t always speak out themselves in the future, so it’s excellent this kind of work is being recognised and supported.

“I also think it’s great the awards championed freelance and local journalists as well as reporters at nationals.”

Alex Bigg, chief executive of MHP Communications, said: “We are proud to host the 30 to Watch awards.

“This year’s event was bigger than ever and I am very confident that the young journalists who have won tonight will go on to great things, just like many of the 30 To Watch winners from previous years.”