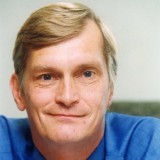 A news editor who “masterminded” a regional daily’s coverage for 23 years has died aged 65.

Tributes have been paid to Paul Thomas, left, who ran the newsdesk on the Dorset Echo until 2008

Born in Bury, Lancashire, Paul began his career on hometown newspaper the Bury Times in 1969, initially covering weddings and birthday.

Four years later he joined the Bolton News as a crime reporter and later moved to Ireland, becoming a reporter on Dublin’s Evening Herald in 1981.

He returned to England to join the Echo in 1985 and “masterminded the paper’s news coverage for the next 23 years”, according to an obituary.

Former Echo Editor Mike Woods told the Echo: “Paul was a larger than life character who you could never ignore. He was also an immensely likeable person who became a great friend.

“From a professional standpoint, he had an ability to get the heart of a news story into the paper and within deadline.

“He was able to spot the quirky human interest story that appealed to readers, but he never forgot the bread and butter everyday neighbourhood news and picture stories which every daily newspaper relies on.”

Former South Dorset MP Ian Bruce said: “I knew Paul very well and he and I always had an extremely frank and very useful relationship.

“He didn’t take any spin from anyone and he certainly had a strong understanding of what Echo readers wanted to read rather than what politicians wanted to tell him.

“He was an old school journalist, hard and professional, and very importantly he made the Echo the forceful campaigning newspaper it was in those days. He will be sadly missed.”

Paul died following a long illness, and his funeral was held at East Lancashire Crematorium, Radcliffe, on Monday.