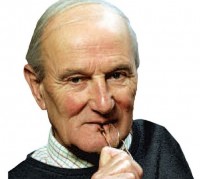 A regional daily gossip column which has been written by only three people in the course of its existence is marking its 80th year in print.

The Grimsby Telegraph’s Odd Man Out column was launched by its then editor Major Hugh Haddow in 1938 and entrusted to the paper’s then news editor, C.R. ‘Choz’ Chandler.

Since then, only two other men have taken on the mantle of writing the column – Frank Whitmarsh in 1959 and Peter Chapman in 1985.

Peter, left, who has written the column for the past 33 years, has now recounted its history in a feature to mark the annivesary.

He wrote: “This year is the 80th in the life of Odd Man Out in the Grimsby Telegraph. That it has survived is by no means entirely due to the three people who have written it.

“For it has been a popular place for those interested in the district to contribute their cumulatively vast knowledge and to air their experiences.”

Peter wrote that at the time of the column’s launch, newspapers had become “more than merely news sheets” and that readers were demanding “something softer.”

“In London the Daily Telegraph’s London Day by Day under the by-line Peterborough provided a model of the inconsequential but interesting bits-and-bobs, the asides of life, each of its offerings concluding with a humorous final paragraph. It was copied,” he recalled.

The first columnist, Choz Chandler, had joined the Telegraph from national daily The Times after being forced to leave London for health reasons.

Wrote Peter: “A gentle man, he piloted the column through the 1939-45 War providing a more than welcome relief from the often grim war news.”

On his retirement the column then passed to Frank Whitmarsh, who like his predecessor was a southerner who came north and made Grimsby his home.

Recalled Peter: “Like Choz, he was a serious man. A practising Christian, he was involved with the town’s musical scene – indeed he died, in harness, reporting on a recital in St James Church where his funeral was to be held.”

Of his own tenure, he added: “I am not inclined, for once, to bang my own drum. Odd Man Out has been and remains a joint reader-writer effort and people have found it a billet for their enthusiasms.

“What matters is that Odd Man Out remains true to the examples set by my predecessors and that who ever it is who takes it over from me will appreciate that legacy.”