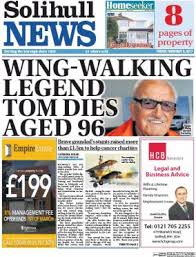 A weekly newspaper founded in 1930 is to cease publication at Christmas with a new daily edition due to be launched in its place.

The Solihull News, which began life 88 years ago as the Warwickshire News, will publish its final edition on 21 December.

From 2 January, it will be replaced with a new Solihull edition of the daily Birmingham Mail which will feature up to four pages of news from the borough from Monday to Saturday.

Reach has confimed that no jobs are to be lost as a result of the News’s closure.

The title was first founded in 1930 as the Warwickshire News and had a free distribution of 44,786 as of its most recently published ABC figures in February 2018.

But in a statement announcing its closure, the company called into question the future of the free door-to-door distribution model.

“A continued decline in local print advertising, particularly in the key property platform, means that the free distribution door-to-door model is no longer sustainable,” it said.

It said the new Solihull Mail will feature up to four pages of borough news, views, features and sport each day, in addition to extensive online coverage on BirminghamLive and community news platform InYourArea.

According to Reach, BirminghamLive and its sister online titles have a monthly audience in Solihull of more than 194,000 – more than three times the circulation of the News.

Midlands editor-in-chief Marc Reeves said: “Clearly closing the Solihull News isn’t a decision we’ve taken lightly, but with such a strong stable of print and online titles that are already immensely popular across the borough, we know we can continue to serve readers and advertisers with the best local news and exciting new ways to reach customers.”