Newspaper publisher Reach plc has netted £5m from the sale of two vacant properties including the former Liverpool Echo office according to a trading update published today.

The Echo’s historic office at Old Hall Street were sold in October to a Dubai-based investor who plans to turn it into a hotel with a sky bar.

Together with the sale of another property in Cardiff, the sale generated net proceeds of £5m, helping Reach plc to reduce its net debt to £55m from £81m at the start of the year.

The trading update also revealed that like-for-like revenues were down 5pc in the final quarter of the year, a slower rate of decline than the third quarter which saw a 7pc drop. 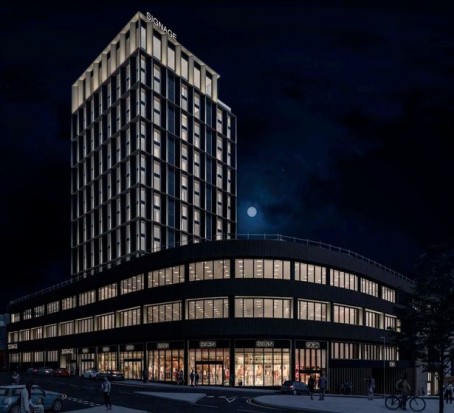 The Echo moved offices earlier this year to new premises at nearby St Paul’s Square.

The Dubai-based Select Group wants to create a “vibrant new mixed use destination” at the Old Hall Street building including retail units, office space and a 207-bed hotel with rooftop sky bar overlooking the Mersey.

Today’s trading update showed overall revenues at the publisher rose by 23pc, reflecting the acquisition of the Express & Star titles earlier this year.

Integration of the former Northern & Shell titles into the group is expected to deliver £3m of “synergy savings” in the current year with the group estimating savings of £20m a year by 2020.

Like-for-like circulation revenue in the quarter fell by 4pc, while print advertising revenue was down 15pc.

By contrast digital revenue is expected to grow by 5pc with display and transactional revenue growing by 8pc on a like-for-like basis.

Reach chief executive Simon Fox commented: “I am pleased with the improved trading in the final quarter. This coupled with continued tight management of the business provides me with confidence that performance for the year is expected to be marginally ahead of expectations.

“We head into 2019 having made good progress with the integration of Express & Star and with clear plans in place for driving digital growth in the year ahead.”