Publisher says sorry after black person cropped out of picture

The publisher of a weekly newspaper accused of racism after cropping a black marketing consultant out of a picture has apologised.

Andi Jarvis was keynote speaker at a digital seminar organised by Mid Ulster Council and appeared in a picture of the event published on the council’s website.

But in its write-up of the seminar, the Tyrone Times cropped out Mr Jarvis who was standing on the right of a group of five people.

Publisher JPIMedia, formerly Johnston Press, has apologised for any offence caused by the cropping, while the newspaper has now edited the picture on its own website to include Mr Jarvis. 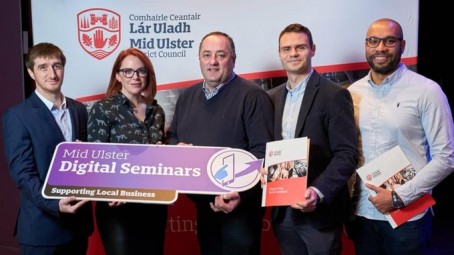 The original image as it appeared on the council’s website, with Mr Jarvis on the right.

Mr Jarvis originally highlighted the issue in a Tweet last week which he subsequently followed up in a series of TV interviews.

He told UTV: “There will be people who will say it isn’t racism. But racism doesn’t have to be about skinheads shouting racial slurs at you in the street.

“I was on the panel and talking about building digital strategies – I wasn’t asked there to add diversity to the line-up, but for my expertise in the area and to add weight and gravitas.

“But to then be whitewashed out of the picture … That’s not a good message.”

A spokesman for JPIMedia said: “We are very sorry if the photograph published online and in the newspaper caused any offence.

“Photo cropping can sometimes be problematic due to technical issues and the framing of images of various sizes and composition. We cannot always include everyone when we publish photographs.

“In this case the original image was cropped to centre around the banner the people on the left of the image are holding.

“There was no intention to cause any offence, but we have already updated the photo online here.”