A 26-strong shortlist has been unveiled for an annual award for the best local newspaper campaign of the past year, with the winner to be chosen by public vote.

The 26 campaigns shortlisted for the prize are all adjudged to have delivered meaningful changes to their communities.

The public vote will go live on Monday 14 May – the start of Local Newspaper Week – with the winner to be announced at the Regional Press Awards ceremony on Friday 18 May. 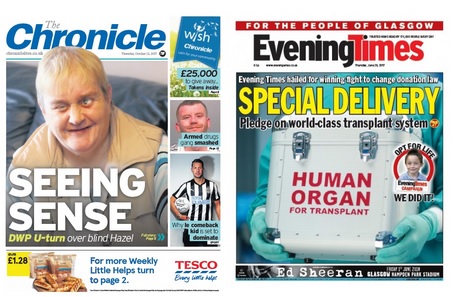 Two of the shortlisted entries for the Making a Difference award

Shortlisted entries include the Manchester Evening News’ powerful campaign #WeStandTogether following the arena attack in 2017, which raised £1.5 million in a day for families of the victims.

Also on the list are the Sling the Mesh campaign from the Cambs Times which highlighted the dangers of pelvic mesh and took the campaign to parliament, and Kent Live’s Save Our Buses campaign which successful helped reverse bus service cuts.

Other contenders include Newcastle daily the Chronicle’s fight to help a local blind woman who also suffered from epilepsy and arthritis successfully win her appeal against the DWP’s call for her to work.

And the Glasgow Evening Times is nominated for its Opt for Life campaign which saw a change in Scotland’s organ donation laws.

Lynne Anderson, deputy chief executive of the News Media Association, said: “Making a Difference highlights the powerful campaigning work of local newspapers in delivering real change for people and communities across the UK.

This year’s LNW will also see the return of #TrustedNewsDay on Thursday 17 May with local papers across the UK encouraged to open up their newsrooms to readers through interactive initiatives such as live blogs and Q&As, to show how their trusted content is produced.

The full shortlist is as follows.  More details of each entry can be found on the Local Newspaper Week website http://www.localnewspaperweek.co.uk/