A weekly newspaper has been rapped by the press watchdog after it published a woman’s bank details in a video on its website.

The Independent Press Standards Organisation has upheld a complaint against the Thurrock Independent after the information appeared in a video about fly-tipping which was published on the paper’s website and social media channels.

The Independent had argued Jenna Cosentino, whose bank details it published, had placed the information into the public domain because the document on which they were found had been discovered on public land.

But, ruling against the Independent, IPSO said there was no justification for making the bank details public. 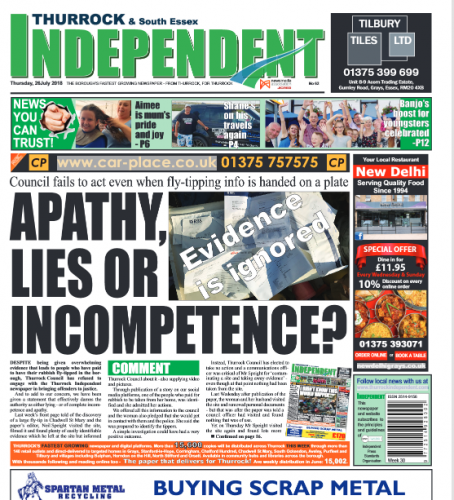 One of the stories which were the subject of the complaint

The article in question reported concerns about fly-tipping at a site in the local area, and included a video of the rubbish found by the editor of the newspaper after he had visited the site to investigate.

Bank and insurance documents for Ms Cosentino’s property, including her account and credit card numbers and outstanding balances, were all visible in the video.

Complaining under Clause 2 (Privacy) and Clause 3 (Harassment) of the Editors’ Code of Practice, Ms Cosentino the video had revealed her name and the address at which she had recently lived, as well as confidential banking information.

After contacting the newspaper and asked that this information be redacted, she said that the editor had said she should agree to speak to the council and the police about how her waste came to be at the site before he would do so. Ms Cosentino subsequently contacted them and said the Independent had agreed that it would not continue to publish her private information.

She also argued that her privacy had also been breached in two follow-up articles – one in which she was named and another in which featured a still image from the original video footage, in which her documentation was visible but with personal and bank details redacted.

Ms Cosentino said that the editor had told her he would be running a follow-up story on the matter, but had not said that she would be named, and added information she provided to the newspaper regarding how her rubbish was removed had been provided confidentially for the purposes of a complaint.

Denying a breach of Code, the Independent said articles reported on a matter of considerable public interest in the local area and added that, prior to publication, it had considered whether it was necessary to redact Ms Cosentino’s personal information from the video, but had decided that editing the footage might affect its authenticity.

It said Ms Cosentino had given the paperwork to an unauthorised waste disposal service without making any attempt to redact her personal information, and that it was currently lying on public land, meaning the complainant had placed the information into the public domain.

The Independent also noted that the paperwork was around two years old, that Ms Cosentino had now moved from this address, and it did not consider that she had an expectation of privacy in relation to the documents.

With regards to the follow-up articles, it did not accept that the correspondence between Ms Cosentino and itself amounted to a formal complaint.

The newspaper said the editor had made it very clear to the complainant that he would continue to report on this issue, and did not accept that it had agreed not to name Ms Cosentino again, while re-iterating that there was a strong public interest in reporting on this matter in an open and transparent way, especially given the perceived lack of action taken by the relevant authorities.

IPSO found that Ms Cosentino’s bank details, including account numbers and balances of accounts, was information about which she clearly had an expectation of privacy and was sensitive confidential information which had come from private correspondence.

Although there was a legitimate public interest in reporting on the issue of fly-tipping, the Committee found the newspaper had not provided a specific justification for the publication of the complainant’s bank details in the online article.

IPSO did not accept that using an unauthorised contractor to remove waste amounted to consent to place private information in the public domain and added that while the documents were visible on public land, the newspaper had not sought to argue that this specific information was so widely known so as to constitute it being in the public domain.

It found no breaches of Code in relation to the follow-up articles.