A public relations agency founded by an ex-regional editor and staffed entirely by former journalists has become an official partner of a Premier League football club.

In is role as official executive partner, Deep South will also be present at AFC Business events.

The company was founded in 1998 by Gareth Weekes, former editor of the Bournemouth Echo and Salisbury Journal, and its 12 staff are all former regional journalists – including editors, news editors, business editors, designers and a picture editor. 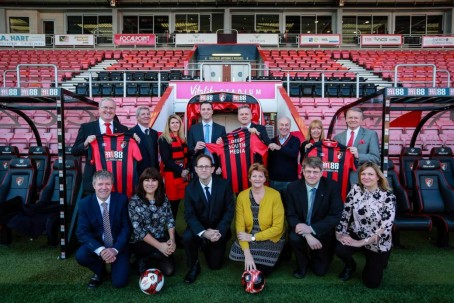 Bournemouth, nicknamed the Cherries, are now in their third consecutive season in the Premier League, English football’s top division.

Deep South managing director Ron Wain said: “It is a privilege to work for AFC Bournemouth in what is our 20th anniversary year. Deep South’s role will be to help the Cherries raise its profile off the pitch, including with the local community, charities, businesses and organisations.

“The Premier League is a global sports phenomenon, with 1.2 billion fans, and the Vitality Stadium, as a premier events venue, attracts more than 400,000 visitors annually. There is scope to engage fans and the wider community in the superb things AFC Bournemouth is doing at grass roots level.

“Research shows that more than a third of Premier League fans claim to be more likely to buy products of sponsored brands, potentially providing a revenue benefit to local businesses through this global media platform.”

“AFC Bournemouth is very much a community club – this is what has driven us forward since the dark days of 2008 and our ethos has not changed since our meteoric rise to Premier League status.

“We very much appreciate working with local businesses – the lifeblood of our community – and our collaboration with Deep South Media is a perfect example of two leading brands coming together.”