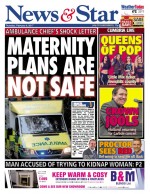 Up to seven photographer roles are at risk of redundancy in a round of cutbacks at a recently-purchased group of newspapers.

Staff photographers working at three Newsquest centres in Cumbria are due to work their last day on Friday.

Titles affected include the News & Star, Carlisle, The Mail, based in Barrow, the Whitehaven News and Workington Times & Star.

The former CN Group titles were bought by Newsquest in March, since when the National Union of Journalists claims there have been almost 100 jobs lost.

According to the union, the latest round of cuts will see three full-time photographic roles and two part-time roles at the Carlisle office, where the News & Star and Cumberland News are produced, reduced to a single full-time role.

Meanwhile the number of photographers in Barrow, will fall from two to one, and the number in West Cumbria from three to one. The company’s Hexham centre, which publishes the Hexham Courant, will retain its photographer under the plans.

A Newsquest spokesman said: “We have bought CN Group to be able to sustain great local journalism – which is why we are investing in more frontline reporters.

“These photographer redundancies are regrettable but form part of our plans to give CN Group a sustainable future – and we will still continue to employ four full-time photographers at those titles.”

But the NUJ chapel in Carlisle has described the move as a “major blow to our hard-won reputation for quality”.

In a statement, it said: “Every company wants a sustainable future, and we, of course, support this. We appreciate that Newsquest, and our industry, faces unprecedented change and challenge as we adapt to the rapidly evolving digital age.

“Despite these difficulties, our newspapers and magazines have punched above their weight and been a beacon of quality local journalism.

“This has been underlined by numerous national and regional accolades that our titles and our staff have won in recent years – against rivals in bigger cities with more resources. We are proud of this culture of journalistic excellence.

“To Newsquest’s credit, we understand there are plans to recruit reporters in Carlisle, bolstering a team that has been drastically reduced over recent years – to around a quarter of the number CN had in Carlisle a decade ago.

“But we believe massively reducing the number of staff photographers to cover an area the size of north Cumbria will ultimately harm the business, when we all want it to succeed.

“The work of our photographers will instead be replaced by pictures from freelances, reporters using smart phones, readers, and PR/commercial companies. Such content is no substitute for first-class photography by trained and seasoned staff professionals.

“We feel that failing to properly invest in our journalism will not allow Cumbrian Newspapers to achieve the sustainable future we all crave. The NUJ chapel has therefore demanded further talks with management to seek a more positive way forward for all.”