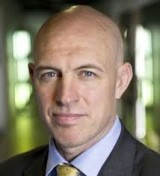 The day was first held last year as part of Local Newspaper week to highlight the contrast with so-called ‘fake’ news, with papers using various platforms to show their readers how trusted local news is produced.

The industry has embraced the idea again this year, with titles marking the event through initiatives such as running live blogs explaining how their newsroom works or hosting online question and answer sessions for readers.

David, pictured, has also written a letter, published by papers across the United Kingdom, praising the work of the regional press.

He wrote: “I have always been a firm believer in the power of journalism as a force for good in our society. At its best, journalism is a messy and chaotic business which challenges and disrupts authority in order to expose the truth.

“It’s not an easy job and, sometimes it can feel a bit like we’re in the firing line, with people bellowing down the phone because they don’t like what we’ve written or said. But, following on from that initial disruption, good things can flow which change society for the better.”

Highlighting “strong examples” of how local journalism has bettered society in the past year, David cited the Glasgow Evening Times campaign which caused donor laws to be changed in Scotland, the millions of pounds raised by the Manchester Evening News following the Manchester Arena terror attack, and Wolverhampton daily the Express & Star’s bid to help “struggling families” on its patch.

He added: “This is all thanks to campaigning local journalism. I began my career as reporter on local newspapers and during that time I learned why journalism matters so much.

“It’s fundamentally about people, their concerns and aspirations, and nowhere is that more important than at a local level.”