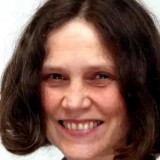 A “newsroom legend” has celebrated 35 years working at a weekly newspaper.

Gay Bolton, of the Derbyshire Times, has marked the milestone with colleagues at the Chesterfield-based weekly on Wednesday.

Gay, pictured, started out at the Times as a senior reporter in 1983, and later became a sub-editor and entertainments editor.

She now works as part of the community content team and writes its weekly Places and Faces column which sees her visiting people, organisations and community groups across Derbyshire to tell their stories.

Gay told the Times: “When I started I was one of the youngest in the editorial office – now I’m the oldest.”

A piece marking her milestone describes her as “mother of the newsroom” and a Times “legend”.

In it, she answered five questions about her time there and described the biggest change she had seen in the industry over the years as “the shift from hot metal composition to typewriters and computers”.

Offering her advice to budding journalists, she added: “Send reports, comment pieces, photos and anything which will get you noticed to your local newspaper, get a good qualification under your belt and work hard at your shorthand.”