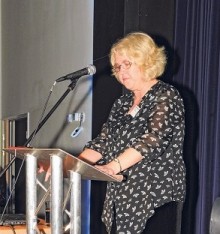 A weekly newsroom was in shock this weekend after its long-serving news editor lost her cancer battle aged 55.

Sarah Clarke, pictured left, had been expected to return to work at the Medway Messenger in the near future after several months off battling the disease.

But her condition worsened last week and she died on Thursday evening.

Sarah, described by one of her reporters as the “rock of the newsroom,” had held the role for nearly 21 years after joining the KM Group in February 1997.

Editorial director Ian Carter said: “The whole newsroom was in shock when we heard the news. Sarah had a fantastic, positive outlook on life and we had all been expecting her to return to work in the near future.

“Given the hours, Sarah put into the job, it’s hard to believe that she fitted so much into her life.”

Sarah originally joined the group as a senior reporter but was promoted to news editor three months later and remained in the role for the rest of her career.

A passionate Crystal Palace fan, she was remembered by colleagues as a dedicated, compassionate journalist who could “talk most men under the table” when it came to football.

Messenger reporter Nicola Jordan said: “As a news editor, Sarah was the rock of the newsroom. Working for much of her time on an evening paper, the Evening Post, she was a calming influence in frequent stressful situations.

“When a front page splash collapsed at the last minute, Sarah would always have a “Plan B”. When the system crashed completely Sarah had reporters dictating copy to head office in Larkfield from Norman’s sweet shop opposite the road.”

Sarah, who lived in Gillingham, was best known in the community as the driving force behind the Pride in Medway awards, which are now in their 17th year.

She put huge amounts of her own time into turning the awards into one of the highlights of Medway’s calendar.

Sarah also took a great interest in education and for many years was chairman of the board of governors at Walderslade Girls School.

She leaves a son, Fraser, and partner Harry. Funeral details are yet to be released.