More than 30 jobs are at risk after Newsquest announced plans to close the printing press of a family-owned publisher it purchased last week.

The company has informed staff of a proposal to cease printing operations at the former CN Group, in Carlisle, with production being moved to Glasgow instead.

The entire printing team in Carlisle are now at risk of redundancy including engineering,  press hall, mail room and print office staff, with 34 jobs in all set to go.

Newsquest completed the sale of CN, which had previously been run by the Burgess family for four generations, on 12 March.

However although the final decision to close the plant was taken by Newsquest, the company says a review of the printing operation had already been under way prior to the takeover,.

The review was launched by the previous CN management following the loss of a contract to print copies of the Metro newspaper in the North of England. 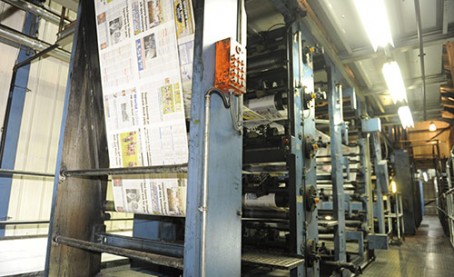 Titles published by CN include Barrow-based daily The Mail and the Carlisle News & Star, as well as weeklies the Cumberland News, Hexham Courant, Workington Times & Star, Whitehaven News and the Advertiser, which serves southern Cumbria.

They will now be printed in Glasgow alongside Newsquest’s flagship Scottish titles The Herald, the Evening Times and the Sunday Herald.

A statement published by Newsquest reads: “Prior to Newsquest’s acquisition, CN Group had lost a significant contract to print the Metro newspaper and the company’s former management team had commenced a review of its printing business.

“Following last week’s confirmation that Newsquest had bought CN Group, Henry Faure Walker, Newsquest’s CEO, visited the staff in Carlisle and, in response to questioning from the company’s printing staff, promised to move quickly to complete the review that had been started by the previous owners.

“Newsquest has now announced to staff its proposal to close the printing operations and to move the associated work to its Glasgow based presses, where its facilities have benefitted from substantial capital investment in recent years.

“A collective consultation process is now open and will last a minimum of 30 days before a final decision is made.

“This proposal in no way reflects on the service provided by the printing staff at Carlisle who have carried out a high quality print service for many years.

“The proposal is a result of the tough economics of the newspaper printing market, and an ageing press in Carlisle which even with heavy investment would not have been viable in a market where surplus capacity substantially outweighs demand.”