Newspaper veteran of more than half a century dies aged 91

A newspaper veteran of more than half a century who continued to work until she was almost 80 has died.

Tributes have been paid to Nancy Buckley, pictured, who spent 53 years as an advertising rep at papers in Yorkshire.

Nancy, who was 91, started out on the Pontefract and Castleford Express before joining Newsquest in 1978.

She worked at the offices of the Maton-based Gazette & Herald until retiring in 2006 at the age of 79. 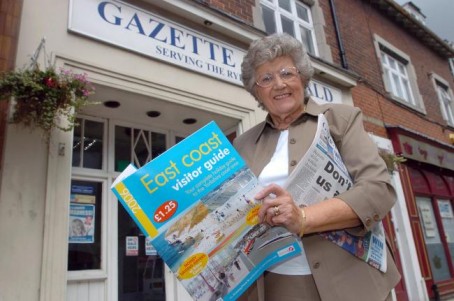 “While she had much expertise in her sales skills, she was also a wonderful person to work with, having a great sense of humour and a lively mind, able to talk on any subject and with a significant sense of what made good newspaper stories.

“Nancy will be remembered with much affection by the host of businesses she worked with for many years.”

Even after retirement, Nancy carried on working on a holiday magazine in Scarborough for 10 years.

Her son Philip told the Gazette & Herald: “The rest of her time she spent in her garden and she had a big circle of friends.”

Nancy is also survived by four grandchildren and two great-grandchildren.  Her funeral took place at All Saints’ Church, in Pontefract last month.