Newspaper blanks out May after press conference ban

A daily newspaper has refused to cover a visit to its patch by Prime Minister Theresa May after being denied access to a press conference.

Mrs May was in Scotland yesterday as part of her whistle-stop tour to promote her Brexit deal ahead of the Commons vote on 11 December.

But pro-independence Scottish daily The National was barred by the Number 10 Press Office from attending a press conference with the Prime Minister.

It prompted the paper to run a dramatic front page today showing Mrs May’s silhouette above a dummy two-deck headline, with some words explaining why it had refused to cover the visit. 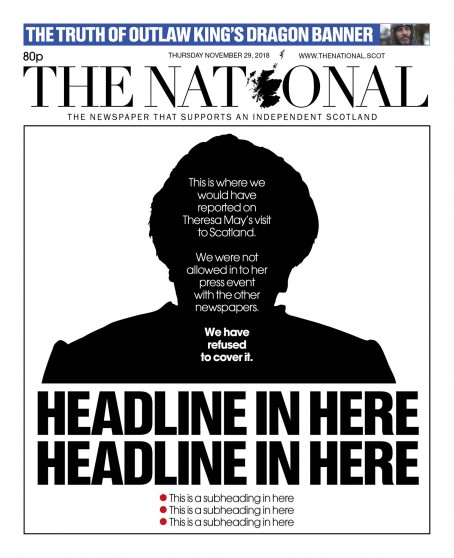 Inside, a large area of white space occupied the space where a report on the May visit would have appeared.

Alongside this was a story about the ban imposed on the newspaper, which Downing Street put down to “limited capacity.”

Editor Callum Baird told HTFP: “It’s absolutely outrageous that the Prime Minister would seek to exclude a newspaper from a press event just because she doesn’t like its editorial line.

“We’re not buying her excuse about limited capacity – the factory she was visiting employs hundreds of people so clearly there’s lot of room. Perhaps she’s been learning lessons from her close friend Donald Trump.

“In any case, her move has completely backfired as this attempt to silence our paper has completely overshadowed her flying visit to Scotland, and we’ve signed up many new subscribers for taking a stand on this issue.

“It was also incredible pleasing to see how much good will we received from fellow journalists from across the world. We are very grateful for their support.”

John Toner, the NUJ’s national organiser for Scotland, called for answers from No 10, saying it was “vital in a democracy that newspapers were given access to those in power”.

SNP MSP George Adam said: “As is par-for-the-course on her day trips to Scotland, she’s hiding from the public and dodging questions from the press – only speaking to a hand-picked audience.”

Daily Mail columnist Stephen Daisley tweeted: “If No. 10 is deliberately excluding @ScotNational from press events, that is unacceptable. You don’t get to shut out a paper just because you don’t like its editorial line. I would expect @ScotTories to make this clear to their Downing St colleagues.”

No 10 did not respond to requests from The National for a comment. 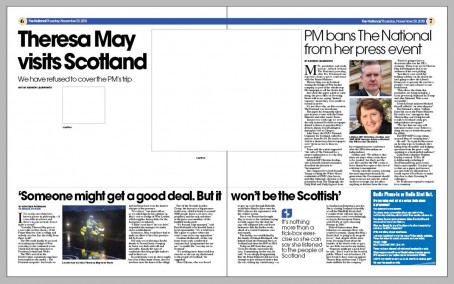