A newlywed couple have thanked a regional daily which helped reunite them with their lost wedding rings.

Kris and Vicky Corbley were visiting York when they lost the rings in some baby changing facilities, and subsequently launched an appeal on social media to try and locate them.

Dan Bean, crime reporter at York daily The Press, spotted the appeal and the newspaper ran a story in print and online after he interviewed Mr Corbley.

The couple returned to their home in the Oldham area with their two young children, but were later contacted by a York resident who had located the missing jewellery and saw the appeal online. 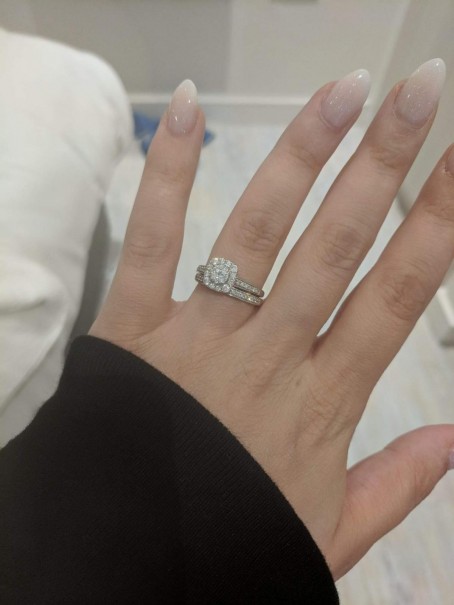 One of the rings which is now reunited with the Corbleys

Of his initial involvement in the appeal, Dan told HTFP: “[Mr Corbley] seemed really grateful that someone had noticed the tweet, and I think they were both a little embarrassed about it, but I’m sure anyone who has had to change a baby’s nappy while out shopping can appreciate how chaotic an experience that can be. Doubly so if you’re also dealing with a toddler at the same time, as Kris and Vicky were.

“I’m not sure what we expected. At best, I think we all hoped the story would get shared and make people more aware of the missing rings, but while Kris said he hoped they might be returned, he didn’t sound entirely convinced. Still, we figured it was worth a try, and the story was among the most read and shared of the day.

“I had planned to speak to Kris a couple of days later, to see if they’d had any luck, but by the time I returned from a job on Friday morning, I’d had a message from him praising the power of the press, and informing me the rings had been found. Turns out someone from the Brighton area was visiting a relative in York, found them in the toilet cubicle, and handed them to her for safekeeping. She had seen the appeals and made contact with Kris to arrange their return.

“He and Vicky were over the moon, and overwhelmed with the support and assistance, not just from The Press and our readers, but the hundreds of people on Twitter who shared their appeal. It was a long shot, but it paid off in the end.”

Mr Corbley told The Press: “We are absolutely made up that the rings are on their way home and that there is a happy ending to what was nearly an expensive lesson learned. It re affirms our belief that there are good and honest people out there

“[We’re] just so lucky to get them back I honestly didn’t think we would ever see them again the support and assistance has been overwhelming.”