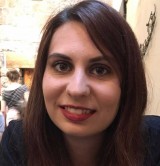 The National Council for the Training of Journalists has lent its backing to Local Newspaper Week – hailing the regional press as an “excellent training ground” for young journalists.

The NCTJ is supporting the week, which begins today, by running a series of pieces on its website highlighting the experiences of local news journalists.

Newsquest editorial development director Toby Granville and Shropshire Star editor Martin Wright will be among those whose experiences will be features.

Laura, pictured, won Trainee Journalist of the Year at the 2017 NCTJ Awards for Excellence and also broke the record for the highest mark in a National Qualification in Journalism media law exam earlier in the year.

An NCTJ spokeswoman said: “As Local Newspaper Week begins today, the NCTJ is proud to support the campaign, run by Local Media Works.

“Now in its 20th year, the campaign celebrates the important role played by local newspapers in communities across the UK and the value of highly trusted local journalism.