A gruesome Christmas murder carried out by a group of Nazis has inspired a former regional daily journalist’s debut novel.

Black Camp 21, by former Bolton News journalist Bill Jones, is based on a true story about the death of a German soldier who was found brutally beaten to death and mutilated in a hut at Cultybraggan prisoner of war camp, in Scotland, during Christmas 1944.

Several months before the murder, over which four SS prisoners were later executed in London, a plot by German prisoners in Wiltshire to break out and march on the capital had been foiled at the last minute.

Many of those implicated were subsequently shipped to Cultybraggan Black Camp 21, which housed the most dangerous and fanatical captured Nazi troops, and the soldier’s death came about after inmates gathered for a show trial to find a scapegoat for their failed coup. 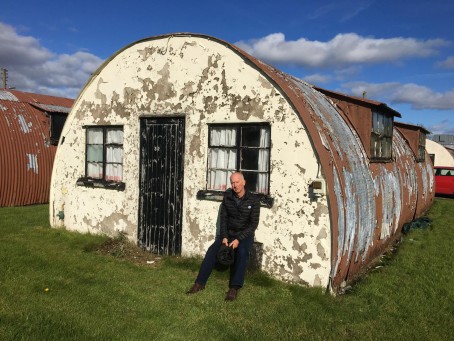 In the post-war years Cultybraggan became a holiday camp for army cadets, and Bill himself visited in 1968.

He told the News: “It’s an amazing place up there and is still untouched and in the same condition it was in 1944. I recently went there for the first time since being at school and it was a very powerful and spooky.

“It’s meant to be one of the most haunted places in Scotland and it’s certainly somewhere you wouldn’t want to be on your own. got a real creepy feeling in my bones which took me right back to 1968 and that school trip.”

Bill has initially intended to write a non-fiction account on German POWs in the UK when he set out to write the book.

But he said: “The more I looked into it and what had happened at Camp 21, especially after I discovered that I had stayed there as school boy, it was very hard to find out about these very young people, and what they did before the war.

“So I though it was much more interesting to write to a write a fictional novel, wind the clock back and tell a story of how these people ended up in Scotland and for what reason they had picked on this particular person.

“In order to give it some humanity I created two or three fictional characters who bring an element of doubt in to the whole process. So we have a hero who is brought into this but is very unhappy about it.

“As he gets deeper, he has to make a choice whether to do what is right or keep the oaths he made to his country. It’s quite a shocking book and it’s really about for what reason this man was killed.”

Black Camp 21 is out now, published by Polygon.