More than 3,000 back weekly’s bid to bring cinema to patch

More than 3,000 people have backed a weekly newspaper’s bid to bring a cinema to its patch.

The Fife Free Press is campaigning to bring a cinema to Kirkcaldy.

The Free Press launched the campaign following the demolition of a former swimming pool, together with a planning application from LaSalle Investments, which owns the town’s Mercat Shopping Centre.

The paper says this “paves the way for a cinema in the heart of the town centre” if an operator can be found, and has urged readers to sign a petition which will be sent to LaSalle.

The Free Press says the petition will not only to keep the pressure on LaSalle to deliver, but to also strengthen their case with a potential operator.

A total of 3,000 people have signed the petition since the campaign began three months ago, and the Free Press splashed on the update on Thursday. 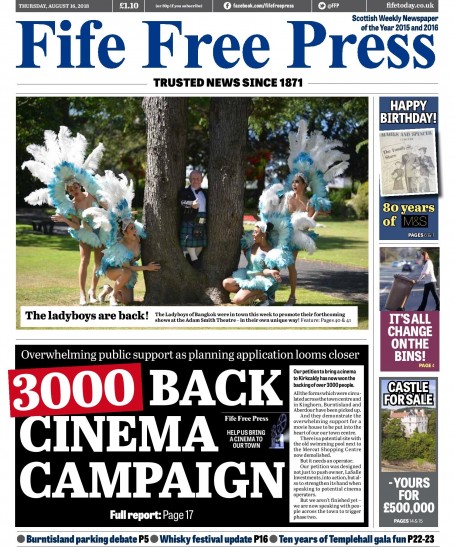 In an accompanying story, editor Allan Crow wrote: “Our petition was designed not just to push owners, LaSalle Investments, into action, but also to strengthen their hand when speaking to potential cinema operators.

“The aim was to demonstrate the level of support they would get in return for their investment – from local people, the business community, the town centre, and politicians who have all spoken in support, and played an active role in getting petitions out to as many places as possible. But we aren’t finished yet – we are now speaking with people across the town to trigger phase two.”

He added: “In September, LaSalle Investment’s planning application to create a major leisure development where the old pool once stood will finally come before councillors.

“Official approval will take the project one major step forward – but the centre’s owners still need to get a cinema operator on board for it to go any further.

“Vue, whose name was widely touted for Kirkcaldy, are out of the picture. But there are still potential operators who could be interested.”