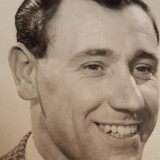 A “memorable and popular” chief reporter who used court lists to check his daughters’ boyfriends were not criminals has died aged 84.

Tributes have been paid to Harry Thomas, who spent 25 years with the Nottingham Post and also worked for newspapers including the Dundee Courier, Fife Herald and Grantham Journal.

Harry, pictured, later went on to serve as public relations officer at South Kesteven District Council, spending a decade there before retiring.

According to his daughter Sian Thompson, Harry was known for his “meticulous attention to detail, confidentiality and a good eye for a story”, as well as being a “memorable and popular” person in Grantham.

She told the Journal: “He was on call 24 hours a day and made a career covering all news items including magistrates courts.

“[Sister] Fiona and I had to tell him boyfriends’ names for him to check that they had not been up in court.”

Harry died last month with his two daughters at his side, and his funeral took place at Derby’s Markeaton Crematorium.

The grandfather of 10 was initially treated for cancer in 1992, and later went on to contract the disease two more times – with the latest diagnosis coming in 2017.

Born in Dundee, Harry was evacuated to Brechin during the Second World War, but returned to his hometown and began as a news reporter on the Courier and Herald aged 15.

After spending two years in the Royal Air Force as part of his National Service, he returned to journalism and, in 1960, met his future wife Mair in Cardiff, where he had been sent to report on an international rugby union match between Wales and Scotland.

The following year, Harry took a job at the Journal, where he served as chief reporter, before moving to the Post, for which he covered Grantham, Newark and the surrounding area.

Mair, with whom he had sons Mark and Harry as well as Sian and Fiona, died suddenly in 1995.  Harry retired in 1998, and married his second wife Mary in the same year.