A man complained to the press watchdog after a photograph of him with his new partner appeared in a regional newspaper – leading to a “difficult conversation” with a family member.

The unnamed man featured in the Dundee Evening Telegraph after agreeing to have his picture taken by professional photographer in a gay bar called Klozet, pictured.

The photo’s subsequent appearance in the Evening Telegraph prompted him to complain to the Independent Press Standards Organisation, after a relative had seen i and asked questions about his relationship with the man standing beside him.

But, while IPSO said his family encounter was “regrettable”, the watchdog found in favour of the newspaper. 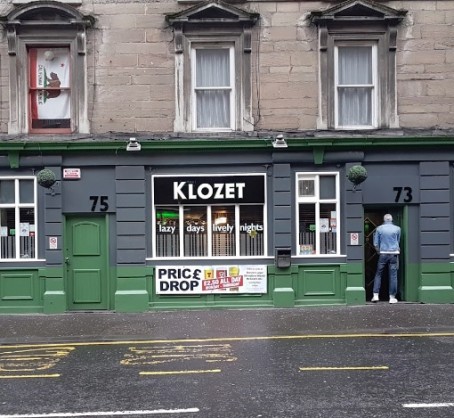 Complaining under Clause 2 (Privacy) of the Editors’ Code of Practice, the man complained about his appearance in the paper’s ‘Dundee Life’ feature – which included a collection of photographs taken at various nightlife venues in the city.

He said a professional photographer, who had not introduced herself as being from a newspaper, had approached him and the man he was with at the bar and asked to take a picture.

The complainant had not asked what the purpose of the photograph was, but believed that she may have been a commercial photographer who was taking the photo for the purposes of trying to sell him a souvenir key ring.

He agreed to pose, but said that when he reviewed it on the screen he had asked for it to be deleted because he was unhappy with his appearance.

The complainant said that he had not told his family about his new relationship when the photo was published, and therefore its publication was a breach of his privacy.

Denying a breach of Code, the Evening Telegraph said the published photograph showed only two men standing at a bar and did not disclose anything about the nature of the relationship between them.

It said that the photographer regularly took photographs at the venue for the newspaper, and did so with full permission from the venue, adding that when the complaint had agreed to pose it reasonable to accept this as consent for the photograph to be published.

The Evening Telegraph strongly denied the complainant’s claim that he had asked for the photograph to be deleted, adding the photographer remembered showing him the photograph and was adamant that no objection had been raised.

IPSO found that while it was regrettable that the publication of the photograph had instigated a difficult conversation for the complainant, by his own account, the publication had not revealed the fact of the relationship.