Portraits of people from a seaside town who died during the First World War are being displayed in phone boxes thanks to an idea by a local news magazine.

The pictures of nine men and one woman are appearing on phone boxes in Worthing as part of a project by the Worthing Journal to mark the upcoming centenary of the Armistice.

An image of a tank, donated to the people of Worthing after the war, also features on one of the boxes.

The Journal approached BT and Adur & Worthing Councils for permission to install the portraits, which were funded by Worthing Town Centre Initiative. 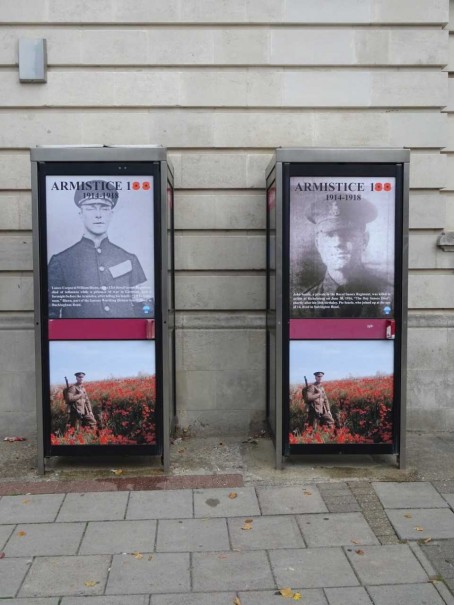 Journal editor Paul Holden told HTFP: “It’s a sobering thought that many of the people portrayed on the phone boxes once walked where we now walk but then went away to war and never came back.

“The portraits are quite haunting and will hopefully raise awareness of Worthing’s sacrifice during the Great War, which claimed the lives of more than 600 soldiers, sailors, airmen and nurses from the town, a staggering number considering Worthing’s population was then only 30,000.

“I must thank BT and Worthing Town Centre Initiative for their enthusiastic support. I’d like to see other cities, towns and villages do something similar to commemorate Armistice 100. What a history trail that would make.”