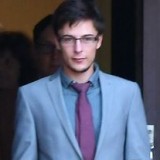 A man who posted a comment on a regional daily’s Facebook page calling for a ‘batter gypos day’ has been cleared of inciting racial hatred.

Joshua North, pictured, sobbed after he was acquitted by a jury at Grimsby Crown Court, following a trial which centred around a comment he posted on the Grimsby Telegraph’s Facebook page.

Mr North, 25, had insisted he was joking when he posted the comment after the Telegraph ran a story about seven caravans which appeared in a car park in Cleethorpes in July 2016.

According to the Telegraph’s report on the case, the prosecution had claimed that he targeted the travelling community, in particular gypsies.

The comment in question, which was removed by the Telegraph after it was posted, stated: “We should have a national ‘batter gypos day.'”

But, prior to being deleted, it had been seen by the chairman of the National Alliance of Gypsy Traveller and Roma Women, who reported the comments to Humberside Police.

She claimed the post was “threatening, insulting, alarming and distressing”, adding it was “terrifying” that people could make threats on a public forum like Facebook and express views that supposedly exposed her community to hatred.

Mr North said that he often posted “ironic comments or sarcastic comments” and did so as a form of satire, making fun of those who held bigoted or narrow-minded views.

He told the court: “In no way, shape or form did I intend there should be a national day. It was said in purely satirical terms.”

He claimed that he was politically “left” and “welcomes immigrants”, adding, when asked if he had heard of the far-right group Britain First: “I can’t put into words how much I dislike this group. I hate them.”

James Gray, defending Mr North, also claimed that there had been Facebook posts inciting hatred and violence which had not been pursued by police.

The jury acquitted Mr North after just over an hour of deliberations, and a costs order in his favour will be made.

Speaking to the Telegraph after the verdict, he blasted “political correctness gone mad”, while the Crown Prosecution Service confirmed its Special Crime and Counter Terrorism Division were involved in the case

Mr Gray said the prosecution had been brought with “the full force of the resources of the counter-terrorism unit”.

Telegraph digital editor Jamie Macaskill told HTFP: “I am pleased the Grimsby Telegraph was not directly involved in this case and there was no suggestion that we held responsibility for individual comments posted on Facebook.

“In this case the comment was quickly identified as being offensive and removed from our Facebook site.

“We’re all aware Facebook comments can occasionally be a rowdy, uncompromising arena but, like most other news titles, we endeavour to ensure comments are monitored to make it an engaging platform for our readers to express their views.”