The Manchester Evening News scooped no fewer than seven top prizes at the Regional Press Awards for 2017 after judges praised the paper’s “exceptional year.”

The paper, which was widely applauded for its coverage of the Manchester Arena attack under former editor Rob Irvine, took home both the Daily Newspaper of the Year and Campaign of the Year awards, in large part for its reporting of the atrocity and its aftermath.

In awarding the Campaign of the Year Award for its #WeStandTogether drive, the judges said that the MEN had put together an excellent campaign that “turned tragedy into triumph.”

The awards, held in association with HoldtheFrontPage, were handed out today in a lunchtime ceremony hosted by LBC presenter Nick Ferrari at the IET, Savoy Place, London, organised by the Society of Editors on behalf of the industry. 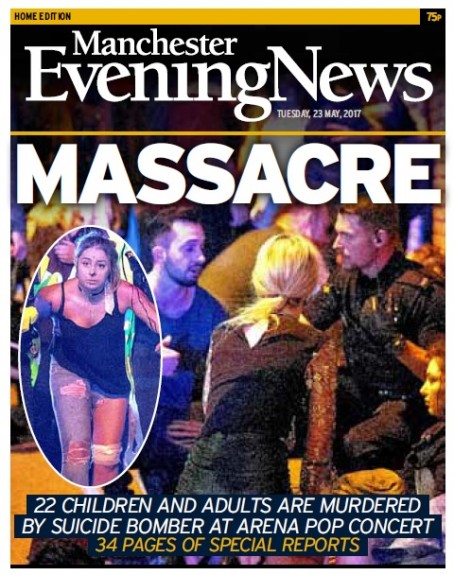 The judges said: “The Manchester Evening News had an exceptional year during 2017 and has been widely recognised for its work.

“Under former editor Rob Irvine, the paper produced outstanding coverage of the Manchester arena atrocity that was dignified, sympathetic and insightful. It reflected the grief and courage of a community in mourning.

“It brought the entire community together and celebrated the things that make Manchester great despite the temptation to take an opposite view.”

“It continues to produce exceptional news, sport and business coverage both in print and online and its social media offerings and followers continue to reflect its strong community spirit.”

And the North West dominance continued with the Liverpool Echo winning three awards, including the HoldtheFrontPage-sponsored Young Journalist of the Year prize.

Josh Parry was named Young Journalist for his undercover reporting on ‘gay conversion’ therapies in the city while the Business and Finance Journalist was awarded to Alistair Houghton for his reports on the regeneration of the city.

And Echo reporter Joe Thomas took home the Scoop of the Year award for his investigation into the predatory exploitation of vulnerable young girls by two paedophile brothers.

The daily and weekly reporting prizes went to the Bimingham Mail’s Jeanette Oldham for her reporting on emerging gangs in the city and the theft of secret police documents from the car of the West Midlands counter-terrorism chief, and the Camden New Journal’s William McLennan for his reports on the human cost of welfare reform and the attempted deportation of individuals that have lived for decades in the UK.

The Eastern Daily Press scored a digital double with the Digital Initiative of the Year Award for its Archant Databank along with the Overall Digital Award.

And the Making a Difference award, chosen by public vote from a 26-strong shortlist, went to the Cambs Times for its ‘Sling the Mesh’ campaign.