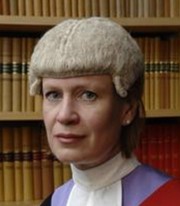 A crown court judge has praised a local newspaper publisher’s commitment to court reporting before leaving to take up a new post.

The group, which publishes the Kent Messenger and several other weekly titles, has two full-time reporters covering cases at Maidstone Crown Court and in Canterbury.

Judge Norton made her remarks to a packed courtroom before leaving to take up a new senior post at Reading Crown Court.

She said: “Having press reporters in court is hugely important. It is vitally important the public know what we do and why we do it.”

And she had a special word for the group’s court reporter Paul Hooper – known to staff as “Scoop”.

“Thank you for the service you give to this court.”

Paul admitted he was touched by the judge’s words saying: “Judge Norton is  truly a class act, funny, witty and always supportive.

“She was the first judge I have ever seen who left the bench to talk to a victim of child sex, to reassure her. It was very moving.

“I was always able to talk to her if any issues came up involving court reports. I will miss her.”