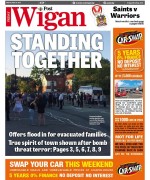 Two Johnston press dailies have posted year-on-year circulation increases in the ABC figures for the second half of 2017 published today.

The Wigan Post saw its average circulation leap by 42pc in the period July to December 2017 compared to the same period the previous year, aided by a part paid-for part-free model which saw 41pc of copies distributed free.

Flagship daily The Scotsman also posted an increase of 2pc, with 76pc of the copies paid-for.

The next best performing English title was the Derby Telegraph – Newspaper of the Year at last year’s Regional Press Awards – which posted a 4pc decrease in sales, while its near-neighbour and Trinity Mirror stablemate the Burton Mail was down 6pc.

Best-performing title in the Newsquest group was Brighton daily The Argus, which arrested a succession of steep circulation declines over recent years with a fall of just 5pc.

Outside of the big groups, the Irish News saw its sales drop 4pc while the Belfast Telegraph and Dundee daily The Courier were both down 9pc.

The poorest performing daily – also a JP title – was the Leeds-based Yorkshire Evening Post which saw its circulation slump 29pc to 11,494.

Full figures for all UK regional dailies, in order of year-on-year change, are as follows: