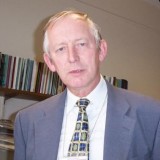 A journalist who worked in Parliament for three different regional dailies over the course of a lengthy career as a political reporter has died aged 73.

Tributes have been paid to David Perry, left, who served as Westminster lobby correspondent for the Edinburgh Evening News, Lancashire Telegraph and Aberdeen-based daily the Press & Journal.

Gloucestershire-born David, who died last week after a short illness, arrived at Westminster from the Edinburgh Evening News in 1970s to cover Pareliament for that title along with the Telegraph.

Former Labour Cabinet minister and Blackburn MP Jack Straw has been among several senior politicians to add their tributes.

He told the Telegraph: “David was the best a journalist could be – terrier-like in pursuit of a story but completely straight and trustworthy. He did a fantastic job for the LET.”

“Parliamentary correspondents are a special breed and David was one if the best-connected and hardest of workers.

And Sir David Trippier, former Environment Minister and Tory MP for Rossendale and Darwen, said: “I thought he was an honourable and professional man. I hugely enjoyed his company and he will be sadly missed.”

Bill Jacobs, who followed David as lobby correspondent for the Lancashire Telegraph and Edinburgh Evening News, said: “David was a lovely man, a superb journalist and very helpful to and supportive of me.

“In one way he as a hard act to follow as he had done such a good job for so long. In another, taking over his beat was easy as all their MPs, including then Scottish Secretary Malcolm Rifkind and future cabinet ministers Jack Straw and Alistair Darling, knew exactly what both papers needed from them.”

Alan Simpson, who worked with David as deputy editor of the Telegraph, added: “He was highly-respected by the politicians he dealt with and the editors he served alike.

“When you commissioned him with a tricky task, you never doubted it would be accomplished. David was a professional through and through.”

For several years David was treasurer of the Parliamentary branch of the National Union of Journalists, and had enjoyed scuba-diving, sailing, and sky-diving in his retirement.

He is survived by wife Loreen, as well as children Darren, Jason and Tanya.