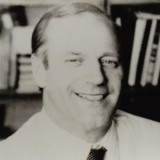 A regional daily journalist who went on to play a pivotal role in the launch of the Channel Tunnel has died aged 76.

Tributes have been paid to Ken Jackson, whose 50-year career in journalism and public relations included stints at the Birmingham Mail, Birmingham Post and Wolverhampton’s Express & Star.

Ken, pictured, was also director of corporate affairs at Tarmac when the Wolverhampton-based construction company was lobbying for the contract to help build the Channel Tunnel.

He helped mastermind the Tarmac publicity campaign, which eventually led to the construction of the historic underground link between the United Kingdom and France.

Ken’s widow Hilary said: “Tarmac was one of the companies in the consortium to build the tunnel and Ken was in charge of the PR and marketing campaign at the time. He always said he helped secure the mandate for the Tunnel.”

Born in Chadsmoor, Cannock, the miner’s son began as a trainee reporter with the Cannock Advertiser before moving to newspapers in the North-East of England.

Ken returned to the West Midlands in 1964 to work on the business desk of the Express and Star, later joining the Birmingham Post as property editor before taking up his first PR job as public relations manager with the Reliant Motor Company, in Tamworth.

He moved back to newspapers with the Birmingham Evening Mail from 1970 to 1977, before a return to PR after being headhunted by Tarmac boss Sir Eric Pountain.

Ken spent 20 years with the company before founding the Jackson-Brown PR agency, which he ran with Hilary for many years from his home at Sandon, near Stafford.

Away from newspapers and PR, Ken worked in a voluntary capacity for many years for a number of West Midland public organisations, including the Government-led Wolverhampton City Challenge inner-city initiative, the First Community Health Trust in Stafford, the South Staffordshire and Shropshire Health Care Trust, Sandon and Burston Parish Council, Sandon Poetry Group and others.

He was also a life member of the National Union of Journalists and a long-serving member of Birmingham Press Club.

Hilary said: “He had a real sense of community. He always wanted to help people, that was his raison d’être until he died – he would give anybody a helping hand.”

West Midlands freelance journalist and former Birmingham Mail business editor Jon Griffin added: “I knew Ken for 40 years from when we first talked in the summer of 1978 in his role at Tarmac. You meet so many people over the years in this business and lose touch with 95 per cent of them. But Ken always stayed in touch.

“He was always a journalist at heart and loved nothing more than recalling his days at the Birmingham Post and Mail in the years of mass circulation newspapers. He was a true gentleman, shrewd with an astute business brain, as well as a supportive and loyal friend with a wry sense of humour.”

And former colleague and ex-Birmingham Post Business Editor Fred Bromwich said: “Ken and I first met up in the 1950s when we were both on the National Council for the Training of Journalists course and, as with many of his former colleagues, he had remained in contact ever since. Ken enjoyed a great career as an outstanding journalist in his field and he was the complete PR professional.”

Ken, who died after a long illness, is also survived by children Debra and Marcus from his first marriage.

The funeral will be held at St Dominic’s, in Stone, at midday on Monday 16 July, followed by burial at All Saints Church, in Sandon, and refreshments later at Sandy Leys Farm, also in Sandon.