A regional daily journalist is giving up personal social media use for a month as part of a campaign aimed at helping people who are addicted to using such websites.

Grimsby Telegraph live news reporter Jamie Waller is taking on the ‘Scroll Free September’ challenge, which is being run by the Royal Society for Public Health.

The campaign aims to raise awareness and help people fight the harmful effects of being addicted to social media, such as negative self-image and poor sleep.

Jamie, pictured, is continuing to use social media as part of his job throughout September, but abstaining from it outside of work. 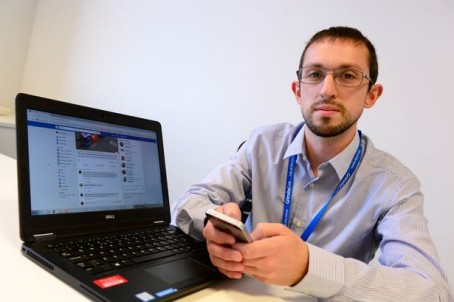 In a piece about his decision to take on the challenge, Jamie wrote: “I’m as guilty as anyone else of using social media when I’m bored or have better things to do – I easily spend an hour a day browsing Facebook or Twitter – but I don’t consider myself addicted to it. This got me wondering, could I do as the campaign suggested and go cold turkey?

“This is complicated slightly as I use social media for work. Like most reporters, I’m constantly looking for news and posting online. I have several social media tabs open on my computer at all times, and I also manage Grimsby Live’s Traffic and Travel Facebook group, which I don’t want to abandon for a month.

“However, I also waste plenty of time scrolling through my personal news feed, seeing what people I haven’t met for years are up to.

“There’s also the danger of using social media as a substitute for actual conversation. We ‘keep up’ with people nowadays by seeing what they’ve posted online – we watch their lives, but don’t really interact. If this option was taken away, would we make the effort to speak to them more?”

He added: “Only time will tell whether the month will see me craving the familiarity of my Facebook feed or feeling liberated by the lack of likes and comments.”