A content editor of two sister weeklies has helped raise more than £200,000 for charity after trekking to an ancient world heritage site.

Debbie Butler, who works for the Lancaster Guardian and Morecambe Visitor, joined a team of 46 women and men who completed the trek in Peru.

Finishing with a train ride to the Inca citadel of Machu Picchu, the participants raised sponsorship cash for St John’s Hospice, in Lancaster.

In a piece for the Guardian on her experience, Debbie described it as the “best of times”. 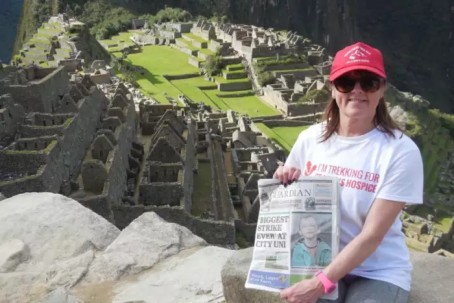 She wrote: “At 3,300 metres high, grappling with the altitude was an immediate challenge. Walking left you breathless but over the coming days, that’s pretty much all we did – one foot in front of the other as we climbed higher and higher with the summit of Hatun Paso in our sights.

“To say the scenery was breathtaking would be an understatement. The Andean mountains provided a dramatic backdrop wherever we walked. The off-the-beaten-track Lares Trail we followed was tourist free. Just us and the odd Peruvian farmer tending his llamas and alpacas.”

She added: “We were a unified bunch, drawn together by a common goal, partners in adversity in some ways. New friendships were forged along the way and some old friendships strengthened. It was hard going and some of us had to draw on our inner strengths to make it to the summit.

“A combination of relief, exhaustion, pride and thoughts of loved ones who had inspired the journey brought tears as we exchanged hugs at the top. The fact that we’d got an arduous 1,500 metre descent still to come was momentarily forgotten.”