A journalist has auditioned for talent show the X Factor as part of a feature for the newspaper.

Zara Whelan, who works for the Daily Post, in North Wales, was sent to try out after talent scouts for the ITV programme offered trials in Llandudno.

Zara opted to sing Shirley Bassey’s 1966 hit Big Spender in the audition, going a capella after not realising she could bring a backing track with her.

In the resulting feature for the Daily Post, Zara described the experience as “incredibly intimidating”. 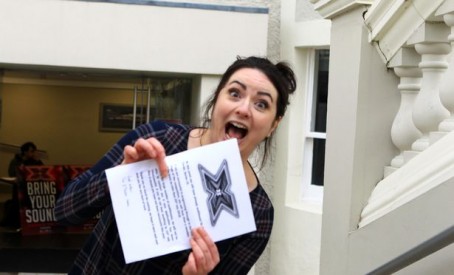 Zara with a printout confirming her participation in the audition

She wrote: “Singing for just a minute felt like a lifetime. I was approaching the last three of the Hey Big Spenderrrrrrrs. I knew it could be my undoing.

“For some reason at that point I remembered there was a growing crowd on the other side of the flimsy screen. I felt so exposed.

“But I did it. Whether it was in tune or not, is a different story. But I opened my eyes, [the two scouts] Toyah and Jordy gave me an obligatory applause. I was then asked what winning the competition would mean to me. I could just about muster the words ‘because my kids would think I’m cool.

“I left the booth to a roaring applause from the others in the waiting area. That bit was nice.

“And that was it. I auditioned for X-Factor and I survived. The adrenaline rush afterwards was amazing, but as someone who is not a natural performer, it’s not something I’d do again in a hurry. Not that they’d let me.

“Who knows, I might make it as a token comedy act.”

If Zara is successful, she will be notified by 25 July.