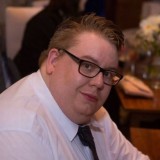 A coroner has been unable to determine why a journalism student who also did work experience with a regional daily died suddenly aged 29.

The death of Jamie McDougall, who studied sports journalism at Middlesbrough’s Teesside University, will remain a mystery following an inquest.

Jamie’s body was discovered at his home at Phillida Terrace in Linthorpe, Middlesbrough, on 3 December last year.

According to a report by the Teesside Gazette, he was found by his friend and flatmate who had returned on a night shift just after 9am.

However, a post-mortem examination carried out by Dr David Scoones was unable to ascertain what caused Jamie’s death.

Dr Scoones found raised levels of ketones had triggered a condition known as ketoacidosis, but not at levels associated with fatality.

The inquest had heard Jamie did not drink regularly, and there was no alcohol or drugs in his system, but he had struggled with his weight and there were also signs of fatty liver.

Before his death, he’d told his mum and friends that he wanted to use his last year at university to lose weight and had been using an exercise bike, as well as trying to eat more healthily.

The inquest was told Jamie was known as ‘Mr Facts’ by friends, for his encyclopaedic knowledge of sport.

He was born in Ottawa, Canada, and lived with his family in Scotland before moving to Middlesbrough, and hoped to find work in North America after graduating.

He had undertaken work experience at the Gazette, reporting for the newspaper during his time there.

Jamie commentated on Kilmarnock FC games regularly for Ayr Hospital Radio and also founded a podcast for fans of the club called ‘One Team in Ayrshire’.