Jim Chisholm: What next for Johnston Press?

The announcement that regional press giant Johnston Press was putting itself up for sale was the big media industry story of the past month.

But what happens next?  Will the 251-year-old company be sold as a single entity, as its board would prefer – or could it be broken up, with prize assets such as the i, the Yorkshire Post and The Scotsman sold to different buyers?

Media analyst and former Scottish Newspaper Society director Jim Chisholm looks at what might happen to JP, and the wider lessons for the news industry today.

That Johnston Press is up for sale – in whole or parts – comes as no surprise to anyone.

The obvious question is what will happen now to JP, its excellent, long-suffering staff, and the communities they serve.

But the big question is what this says about the state and future of news provision in the UK.

Let me split this into three parts:

How we got here?

From local beginnings in 1846, Johnston Press oversaw its fiefdom of Falkirk, Scotland. A cautious stream of acquisitions of local weeklies began in the 1970s.

In 1988, Chairman Freddie Johnston, a gregarious, much-loved and passionate advocate of community journalism led the company onto the stock-market.

In 1994, JP purchased its first daily, the Halifax Courier. In the same year Freddie appointed Tim Bowdler, a businessman, not newspaperman, as CEO.

Tim’s brief from his board was simple: Grow the business, achieve “synergies”, then use the cash generated to make more acquisitions. JP’s relentless path included EMAP in 1996, then Portsmouth & Sunderland in 1999.

But by the time JP acquired the Yorkshire Post Group in 2002, the alarm bells were ringing.

Could this “buy-milk-buy” strategy survive when every acquisition was a declining business.

Could JP, a proven publisher of weekly papers, adapt to the far more complex intricacies of major regional dailies?

By the time JP acquired The Scotsman, in 2005 (without its premises) for double the price paid by the Barclays ten years earlier, Tim was being described as “King of the Regional Press”. He had delivered to his brief.

…. Except his brief was flawed.

Because of the milk to buy policy, the overall declines accelerated necessitating further cost cuts in an ever-plummeting spiral.

And so, as the markets plummeted in 2008, newspaper share prices in the UK and North America collapsed.

Tim resigned in 2009. Then following a short tenure by a respected successor, JP’s chairman Ian Russell appointed Ashley Highfield, saying “His combined online and media sector pedigree will be a major strength in enabling us to grow our business again.”

While Tim’s brief from shareholders was to build the business, so Ashley’s brief was to use this “pedigree” to grow the business.

The company achieved significant improvements in its balance sheet, due to some smart, if controversial steps, by then CFO, now CEO David King that plastered over the strategic cracks. But top-line performance was a long way from Ian Russell’s expectations.

To quote Tom Peters: “If I knew where I was going I wouldn’t start from here.”

The elephants in the room are the, possibly negotiable, £200m of debt, plus the longer-term £40m pension deficit.

The unquantifiable opportunity for any owner(s) has to be to rectify JP’s poor top-line performance:

Then there is the issue of the digital supremacists’ plundering of the digital value chain, which, if resolved, could transform the industry’s fortunes.

No-one in their right-mind would value any media business on the illusion that these two scenarios will happen.  So what are the options:

Undoubtedly from JP’s perspective a sale of the group as a whole would be preferable, and is the preferred option of leading shareholder and contender, Christen Ager-Hanssen, But some crude book figures are not encouraging.

JP’s parts are undoubtedly of greater value than its whole. And in many cases will be very attractive to different types of prospect.

There have been improbable suggestions that the ‘i’ acquired by JP for £25m could be worth £60m, but only “only once the newspaper is decoupled from its parent’s debt burden.”

There will undoubtedly be bidding wars between a range of current and prospective players for the likes of The Scotsman, Yorkshire Post, Belfast Newsletter.

Then there are strategic clusters of titles, that will appeal to the major publishing groups. 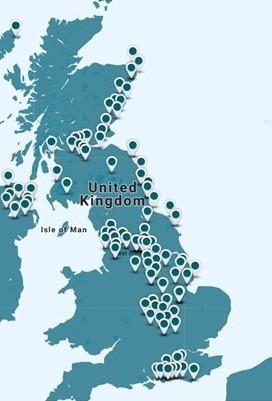 As this map shows JP’s business in tight geographical groupings which overlap or border with other regional groups similarly clustered units.

Perhaps in February 2016, as the company value was falling at a record pace, if the company had chosen to sell one of these clusters, rather than spent most of their available cash on acquiring the “i”, the picture today would be very different.

There is also a possibility of local interest,

One fanciful notion is of the staff trading their pensions for the paper which is as much theirs’ as JP’s shareholders. There are many examples of discarded staff exacting revenge by setting up in competition with their previous employers.

One feature of any bargaining arena is time and time is not on JP’s side.

Lessons for the news industry today.

Another backdrop is the prognosis for print. The average UK print title has until 2021/2 before the decline in print advertising makes titles unviable. Is JP our industry’s harbinger of what could follow?

So, the immediate imperative is realising a “point of inflection [POI]” where digital revenue growth exceeds the losses in print.

The government’s announcement of a “digital services tax”, is one small recognition of abuse of power of the supremacists.

The Cairncross Review promises a range of insights and recommendations.

The JP story is a sad one. But it is only an exaggerated version of what has been happening across the increasingly corporate news industry over the last thirty years.

There are now countless examples of what I call the “New News”, in which individuals are grasping markets or titles that are proving to be more successful than the corporate incumbent.

For the future of press-freedom and diversity, it is vital that these “new-newsers” are given the freedom, social and economic support to flourish. Perhaps the Government’s proposed “digital services tax” for global companies over £500m, should be reinvested in incentives and tax relief for new news ventures under, say, £2m.

The notion of shareholders trousering 30 pence of every pound spent by customers at the expense of news provision is long past.

They need to ask why so many individuals, co-operatives, and digital new entrants are creating vibrant, viable new news ventures, where their own heavily centralised, commoditised models are struggling.

JP is as much a story of mis-ownership as mis-management, against a backdrop of rapidly changes in customer demand, and the disruption of digital giants. But the pioneering ‘New Newsers’ and ongoing reinvention by the major players, offers plenty of room for optimism.